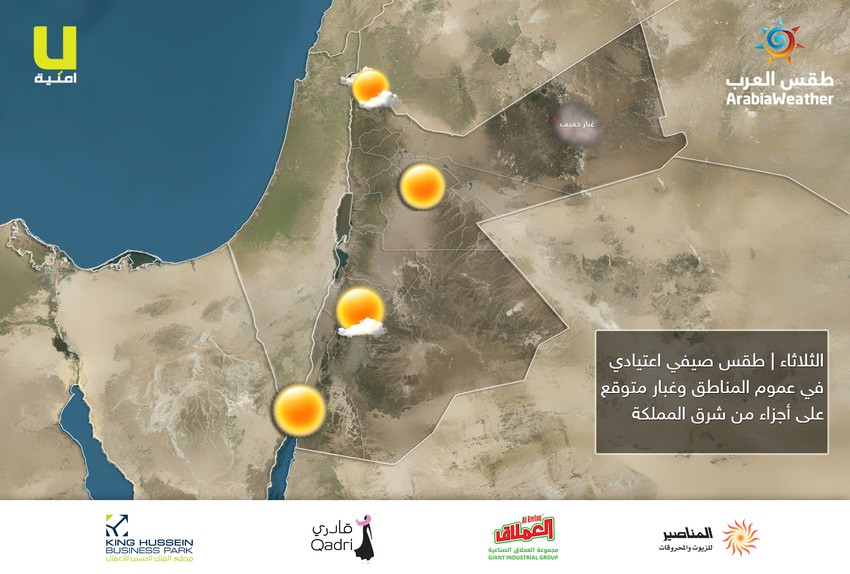 Tuesday Regular summer weather throughout the regions ... and expected dust over parts of the eastern part of the Kingdom

Arab Weather - Temperatures remain around their rates for this time of year, where the weather is mild especially over the mountains and tends to heat the afternoon period in some regions, while it continues relatively hot in the Jordan Valley, Bahralmite, Aqaba and Badia regions .

Heavy dust on parts of the eastern kingdom

The wind is expected to be active with the afternoon hours and be dusty in parts of the eastern Badia, so the Arab weather recommends attention from the occasional heavy dusts with afternoon and evening hours in Safawi, Azraq and the border crossing with Saudi Arabia "Al-Omari.

With night hours , the weather is fair in most regions, with some low clouds appearing in the north of the Kingdom .

Among the most prominent headlines of the monthly bulletin for the month of July issued by Arab Weather:

Jordan | The Kingdom continues to be affected by moderate air mass, moderate weather during the day and mild to cold at night

Is New Zealand the first country to be virtually free of Corona after 100 days have passed without local transmission of the virus?