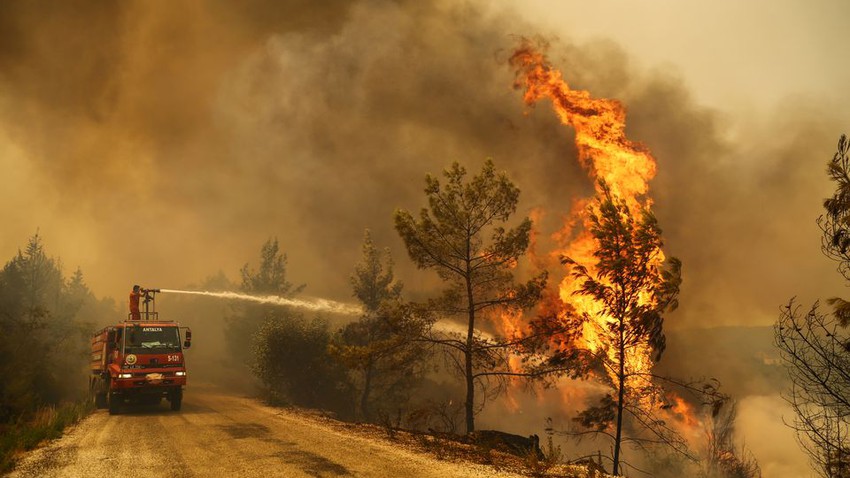 Weather of Arabia - Turkey is still fighting the huge fires that broke out four days ago in the south and west of the country, which amounted to about 100 fires, and the number of fire victims until Saturday (July 31) rose to six, while two firefighters were killed during efforts to control After the fire in Manavgat, thousands of people were evacuated, many of whom lost their homes after they were completely engulfed by the fire.

Satellite images showed the scale of the fires and the huge amount of smoke rising from the Antalya and Mersin fires, which spread to the island of Cyprus, about 150 kilometers away.

On Saturday, a new fire broke out in the tourist resort of Bodrum on the Aegean coast, and some residential areas and hotels were evacuated.

It is reported that forest fires sometimes spread in southern Turkey during the summer, but the authorities say that the recent fires covered a much larger area than usual.

President Recep Tayyip Erdogan, during a visit to Manavgat, on Saturday, said that all damaged houses will be reconstructed and losses compensated, adding that Azerbaijan, Russia, Ukraine and Iran have sent firefighting planes and support teams to the affected areas.

Agriculture and Forestry Minister Bekir Bakdemirli said that a total of 101 fires broke out in the past four days, of which 91 were under control.

Heat waves and droughts that hit the region

The intense heat and winds were the main reason for the expansion and spread of the fires in such a massive way, and the Turkish Meteorological Authority said that forecasts indicate heat waves along the Aegean and Mediterranean region, and temperatures are expected to reach 43 degrees Celsius to 47 degrees Celsius in Antalya. next week.

In neighboring Greece, authorities warned residents not to go outside on Friday as temperatures reached 40 degrees Celsius in Athens and the ancient Acropolis (the most visited monument) was forced to close briefly due to the heat.

On the Italian island of Sicily, firefighters said on Saturday they were battling for the second day in a row a bushfire that reached the town of Catania, forcing people to leave their homes and temporarily closing the local airport.