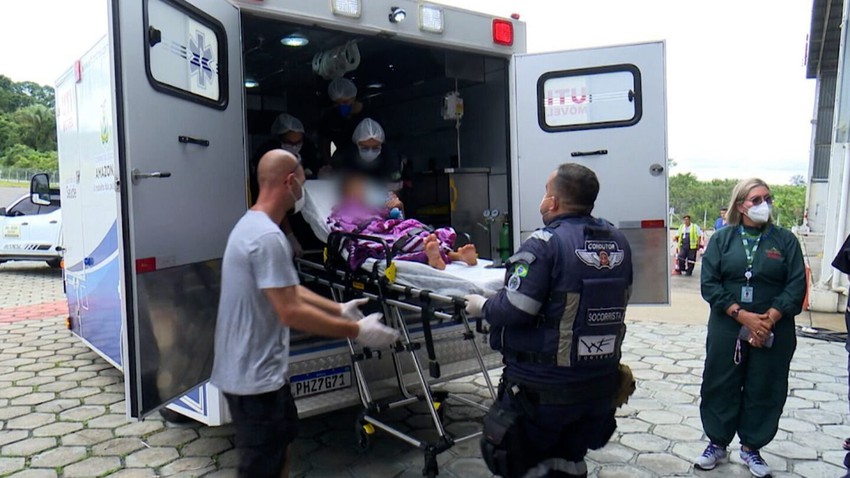 Weather of Arabia - After being lost for nearly 4 weeks in the Amazon rainforest, two indigenous boys aged nine and seven were rescued and were in a state of severe malnutrition, and were taken to hospital for treatment. How did the story begin?

The two children got lost trying to hunt little birds in the forest near Manicuri, in the Brazilian state of Amazonas, on February 18, so hundreds of local residents launched search attempts to track the boys and spent weeks searching for them after they disappeared, until they were found by a local logger on March 15 current.

To make matters worse, the two children went missing during the rainy season in the Amazon, which made roaming in the jungle more difficult than usual, and emergency services were forced to stop the search on February 24. Nevertheless, residents continued to search for boys.

She was finally found by a man who was chopping wood 3.7 miles from the village of Palmyra in the Lago Cabana reserve where the boys live, after he heard the voice of a young boy screaming for help, as the child began to call for help when he heard someone approaching them.

They were found lying on the forest floor from exhaustion, their small bodies suffering from hunger and weakness, with many skin injuries.

How did the two children survive?

Local media reported that the boys said they did not eat anything, but were drinking from the rain, and the older brother said that (once) the younger brother could no longer walk, so he had to go and collect the fruit to eat, but he got to the point where he could no longer Walking from weakness.

The boys survived in the jungle, thanks to God, after they drank rainwater and ate a wild fruit called surva, but their bodies were covered in insect bites and scratches from tree branches. The two children were sent to a hospital in Manikuri before being transferred by helicopter to another hospital in Manaus on Thursday morning.

Is the health status of boys improving?

Pediatrician Eugenio Tavares said the boys were in a "serious" but "stable" condition, given their experience.

"The two children are malnourished and have infections in the skin, ear and back," Tavares added. "The breathing rate is normal and they have no cough. The kidneys were a concern but now they are working very well again. We need to take care of the remaining infections and micro-nutrition to know." whether they will tolerate the gradual diet to gain weight.”

Getting lost in the vast Amazon rainforest is not uncommon

In January last year, pilot Antonio Sena spent 36 days in one of the most remote areas of the Amazon rainforest after his plane crashed.

In 2008, an 18-year-old Aboriginal youth was lost and lost for 50 days after going fishing, but died shortly after being rescued.