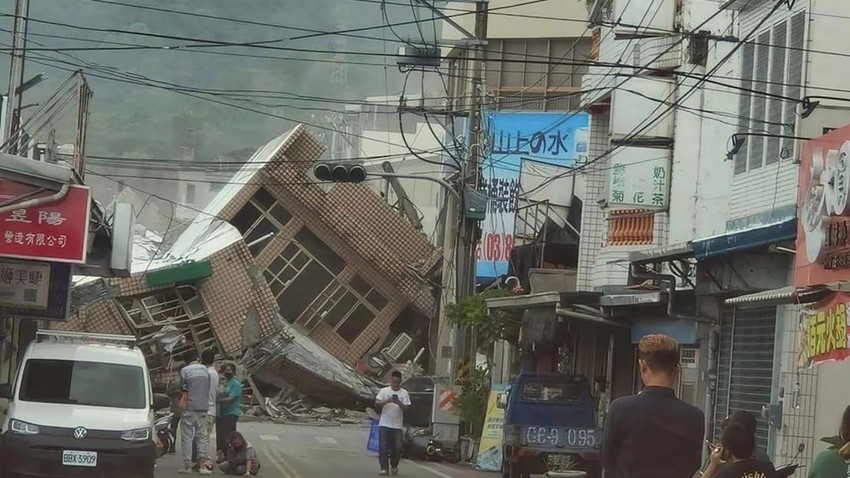 Arab Weather - A 7.2-magnitude earthquake struck the coast in southeastern Taiwan on Sunday, according to the US Geological Survey, which prompted Japan to issue a tsunami warning, and the earthquake occurred in an area 50 km north of Taitung city, at a depth of ten kilometers, according to the center. .

A 6.6-magnitude earthquake hit the same area on Saturday, and there were several aftershocks, but Sunday's tremor was the strongest so far, and the Japan Meteorological Agency and the Pacific Tsunami Warning Center issued tsunami warnings shortly after the quake. However, they later mentioned that the danger had passed

Wow. Another big earthquake in Taiwan. This one was a 6.8 with the epicenter in Taitung County. Even stronger than the 6.4 on Saturday. This video is from Taipei, more than 200 miles from Taitung. pic.twitter.com/5OTLRT55WX

In Taiwan, a building housing a shop on the ground floor collapsed in the town of Yuli, according to the island's semi-official Central News Agency, and a video recording broadcast by the agency showed panicked residents running towards the building, which collapsed, and thick dust rose from it.

In turn, the Taiwan Railway Administration said that a train derailed at Dongli Station in Hualien after a shed fell on it during the quake, and pictures circulated on social media showed the six train cars tilting at the station.

The railway administration stated that the train's 20 passengers were evacuated and no injuries were recorded.

Taiwan experiences frequent earthquakes because of their location at the convergence of two tectonic plates, and the mountainous island is located on a "belt of fire" that witnesses intense seismic activity and extends across Southeast Asia and the Pacific Basin, and the east coast often witnesses earthquakes, most of which cause minor damage. about deaths

Another earthquake in Taipei/Taiwan some minutes ago. Felt stronger than the first one yesterday, guess it's more than an aftershock. pic.twitter.com/FPZxsAZVbu

It is worth noting that in 2018, Hualien Tourist District was hit by a 6.4-magnitude earthquake, killing 17 people and injuring about 300, and in 1999, a 7.6-magnitude earthquake killed nearly 2,400 people in the worst natural disaster in the island's history.