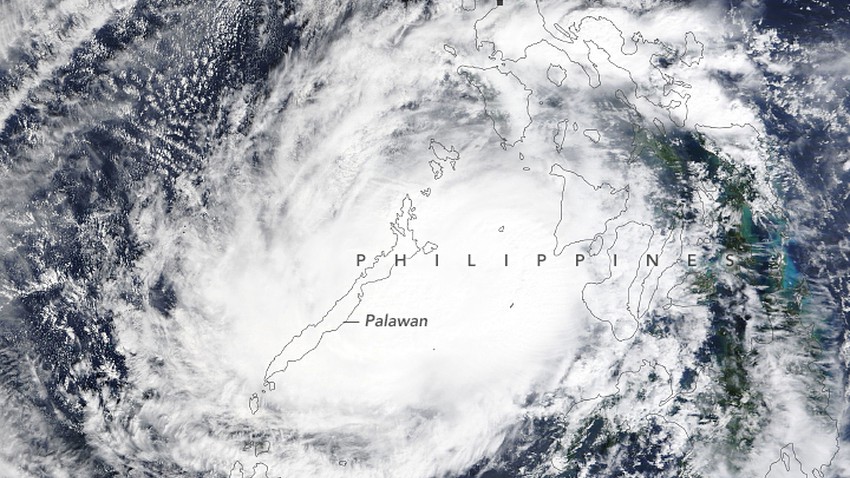 Weather of Arabia - Meteorologists announced that Hurricane Ray, which turned into the strongest storm to strike the Philippines this year due to rapid intensification, exceeded all expectations and caused the death of about 400 people.

Before Hurricane Ray underwent a rapid intensification process, meteorologists initially warned of a storm that could cause "tremendous damage" with winds of up to 165 kilometers per hour.

For his part, meteorologist Nikos Penaranda, who analyzes thunderstorms at the Philippine Meteorological Office, said that "the situation has developed very quickly... Our models were unable to predict how the storm will intensify and it exceeded all our expectations."

The UN Climate Change Agency said it was "possible that the frequency of rapid intensification has increased over the past four decades" due to rising temperatures.

In the case of rapid intensification of storms, warm ocean waters and different wind speeds near the eye of the storm act as fuel to make it more intense. In Ray's case, the storm transformed into a Category 5 hurricane at speeds similar to what happens when a passenger plane begins to take off from the ground.

Bohol, the Philippine provinces most affected by the cyclone, where the cyclone poured heavy rain and ripped off roofs, uprooted trees and overturned fishing boats, and floods swept away homes, and the authorities counted more than a hundred dead and dozens missing, and the island is largely deprived of electricity and communications. The typhoon caused devastation in Siargao, Dynagat and Mindanao islands.

About a week after the cyclone struck, residents suffering from a lack of water and food are still trying to recover furniture and other belongings from the rubble of their homes.