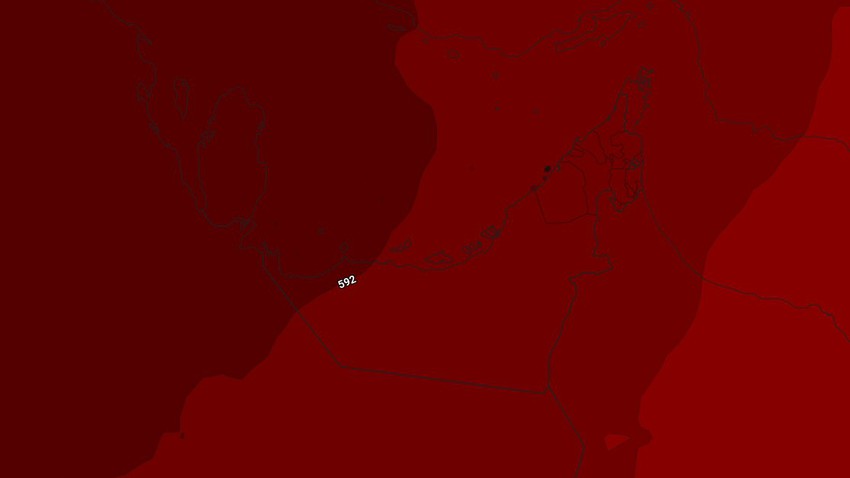 Arab weather - the latest outputs of the numerical models indicate the deepening influence of the seasonal India depression associated with the very hot air mass, so that temperatures rise throughout the week and the weather is very hot and exhausting throughout the week during daylight hours, and annoyingly hot at night, with the emergence of large quantities From clouds at different heights, especially medium and high clouds.

Hot weather on a daily basis in some areas

It is expected, God willing, that temperatures in some interior regions, especially the southern and western regions, will record record values, approaching the 50-degree Celsius barrier, so that the weather will be hot all days of the week in those regions.

The latest outputs indicate that clouds continue to appear at different altitudes on a daily basis, and there is a possibility of thunder showers of rain on limited parts of the eastern mountainous heights on a daily basis, especially in the afternoon and afternoon hours.

Activity on the surface wind speed that causes dust and dust

It is expected, God willing, that the winds will blow over the country from different directions during the current week, as they will be northwesterly to fluctuating in direction, and be moderate to active in speed, and work to raise dust and dust locally.

Important recommendations from Arabia Weather to deal with the expected weather conditions :

- Avoid exposure to direct sunlight for long periods.
Drink plenty of cold fluids and refreshments throughout the day.
Attention not to leave sterilizers and any flammable materials inside the vehicles.
Attention not to leave children inside vehicles, even for a short period of time.
Attention to the risk of an increase in the proportion of dust and dust in the atmosphere and its impact on respiratory patients.