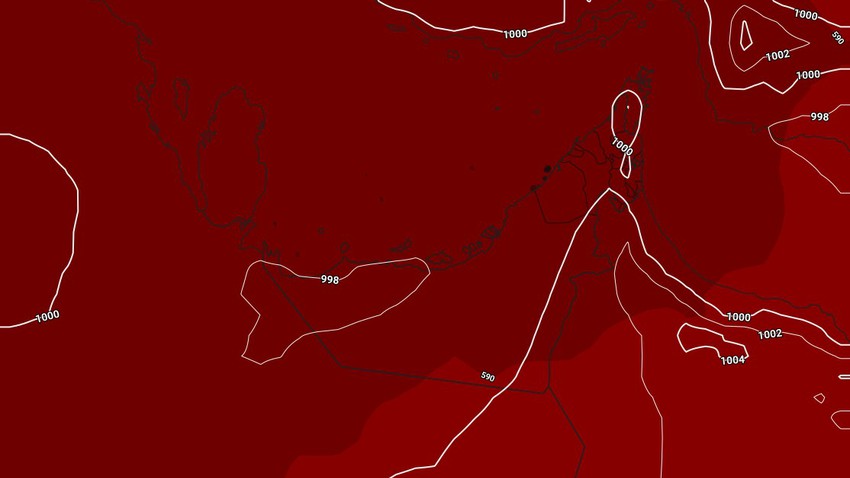 Arab weather - the latest outputs of the numerical models indicate the deepening influence of the seasonal India depression associated with the very hot air mass, so that temperatures rise throughout the week and the weather is very hot and exhausting throughout the week during daylight hours, and annoyingly hot at night, with the emergence of large quantities From clouds at different heights, especially medium and high clouds.

Temperatures are approaching 50 degrees Celsius in some areas

It is expected, God willing, that temperatures in some interior regions, especially the southern and western regions, will record record values, approaching the 50°C barrier, especially in the middle and end of the week.

Continuing chances of local thunderstorms over parts of the interior

The latest outputs indicate the continuation of the flow of the remnants of the moist air mass, so that clouds appear on a daily basis, and there is a possibility of thunder showers of rain on limited parts of the interior and eastern mountainous highlands on a daily basis, especially in the afternoon and afternoon hours.

Activity on the surface wind speed that causes dust and dust

It is expected, God willing, that winds will blow over the country from different directions during the current week, between northwest and south/southwest, and they will be moderate to brisk, accompanied by strong gifts, especially in the second half of the week, and they work to raise dust and dust locally. Loaded with a percentage of dust.

Emirates | Warning of low horizontal visibility due to fog, and the warning includes coastal areas and the Emirate of Ajman