under surveillance | Arab Weather is watching the formation of a tropical situation in the Arabian Sea at the end of this week, and these are its most prominent possible paths 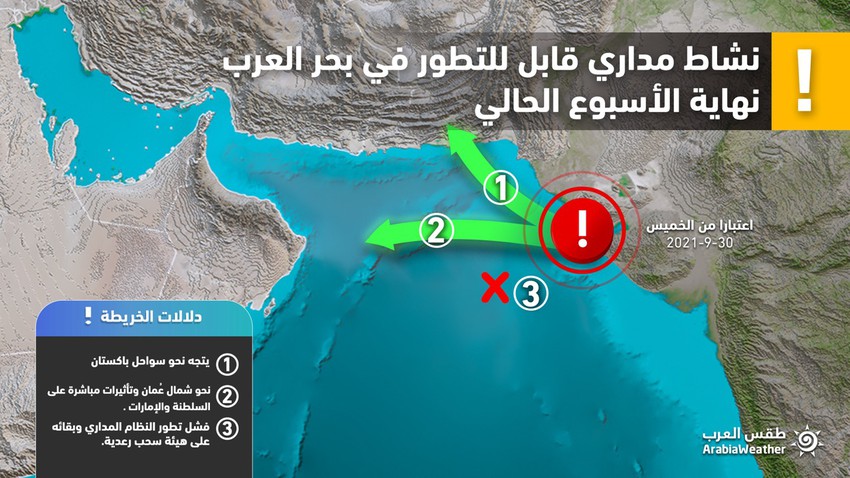 Arab weather - Indicators and weather conditions increasingly continue to form a tropical situation in the Arabian Sea at the end of this week, and in contrast to the outputs of many numerical weather models, the weather forecast staff in Arab weather shows the most prominent possibilities of the expected tropical situation.

Tropical Storm Jallab lands in the Arabian Sea this weekend

In the details, the tropical situation off the coast of India on Sunday evening developed into a tropical storm with a wind speed around its center of 40 knots, bearing the name Jallab. The Arabian Sea along the Gulf of Gujarat by the end of this week, God willing. 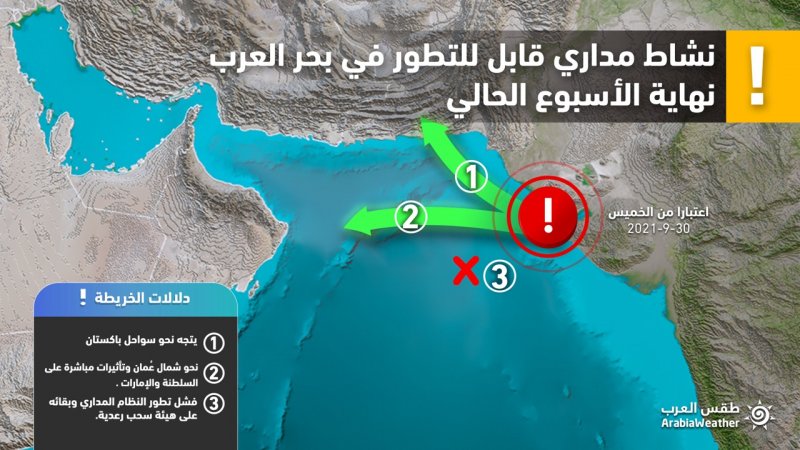 The weather forecast staff at the Arab Regional Weather Center, after reviewing many variables and data from numerical models, sees several possibilities for the behavior and movement of this situation:

First: Orientation of the tropical situation towards the north of the Sultanate of Oman and a direct impact on it (40%)

If the tropical situation follows this path, the effects will be direct on the Sultanate of Oman and the Emirates, in addition to parts of eastern Saudi Arabia, necessitating the issuance of many alerts.

Second: The tropical situation is directed towards the coasts of Pakistan (40%)

The second possibility is the rush of the tropical state towards the coasts of Pakistan, and it is believed that the sub-tropical air rise may cause this possibility, but there are negative factors that will weaken this tropical state, which is a rush of dry air coming from the Pakistani and Afghan deserts, these dry winds greatly weaken and perceptible to the tropical state.

Some computer models indicate that if the tropical state follows this path, it may break again towards the Sea of Oman, and despite the availability of warm waters as well as weak shear winds, the flow of dry winds will be a “killer” factor for this tropical state, and its effect may be limited to Northern Oman in the form of random clouds.

Third: Weakness of the tropical condition in the Arabian Sea and its limitation to random thunderstorms (20%)

The third possibility, which is the weakest, indicates the failure of thunder clouds to develop into a tropical depression or a tropical storm, and then the thunder clouds may reach parts of the Sultanate of Oman and Yemen, and perhaps towards the southwestern sector of Saudi Arabia, leading to a state of atmospheric instability.

This possibility comes as a result of some numerical models expecting the tropical state to enter an active region of shear winds, and such weather conditions weaken the vertical growth of thunderclouds and their cohesion with each other.

The course of the tropical state is still uncertain, as it is difficult to determine the path inevitably and accurately from now on, as numerical weather models find it very difficult in the process of monitoring, predicting and simulating tropical conditions, especially before the formation of the tropical state in the Arabian Sea, in addition to the large number of atmospheric variables, as the The possibilities are distributed between Pakistan and the Sultanate of Oman, and the Arab Regional Weather Center invites you to keep abreast of the news issued by the weather forecast cadre in the coming days regarding expected weather updates, through the Arab Weather application.