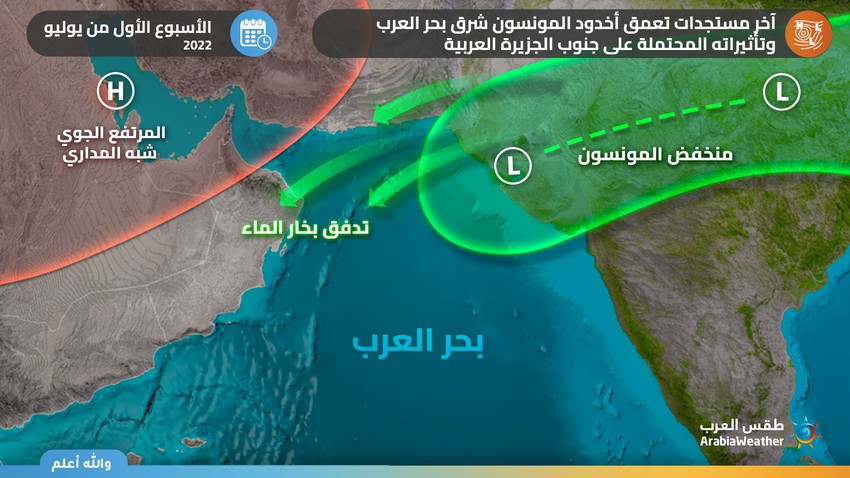 Arab Weather - The latest weather maps received from global centers and others developed from Arab weather internally indicate expectations of the return of rain chances in parts of southern Arabia during the first week of July (starting from the middle of next week), God willing.

The weather forecasters at the Arab Weather Center indicated that the air system will witness a change in the region, where it is expected that the subtropical jet streams will shift to the middle of the Asian continent, and the high altitude perched over the atmosphere of the Arabian Peninsula will budge eastward to the south of Iranian territory, resulting in a greater deepening of the air currents. The "eastern" tropical jet is towards the south of the Arabian Peninsula, and here the possibility of several parts of southern Arabia, including the Sultanate of Oman, being exposed to unstable weather conditions, God willing. 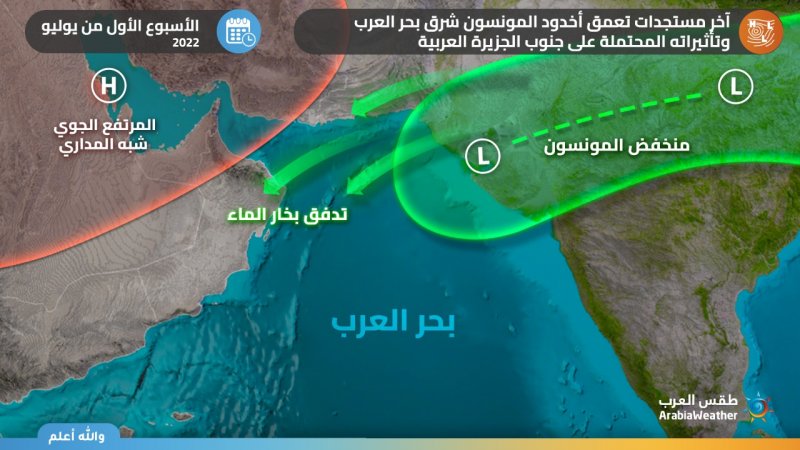 And coming to the fore, many parts of southern Arabia, especially the Al Hajar Mountains and the eastern highlands of the Emirates, were affected during the next week by weather disturbances resulting from a combination of the extension of the Monsoon depression from the east and the progression of the seasonal belt of convergence of winds to southern Arabia (ITCZ), and a superficial response to the thermal depressions in a way. Effective in some areas, this weather system works to cause high instability, and this results in increased chances of thunder showers of rain and are actively accompanied by downward winds that raise dust and dust in many areas.

The outputs of the analyzes and the computer simulation data of weather forecasts until the time of writing this report fluctuate in their predictions of the development of thunderclouds and the areas covered by them accurately during the first week of next month, due to the lack of accurate sensing of the behavior of the jet winds in the upper layers of the atmosphere and the location and depth of the subtropical high altitude, Extreme difficulty in sensing the extent/quantities of water vapor with equatorial characteristics in the region's atmosphere, which is needed to ignite the fuse of thunder clouds.

Therefore, all of the above is within the context of the latest forecasts of the weather readings issued by the Arab Regional Center for Meteorology and Forecasting, and updates that will highlight more details will be released incrementally as needed, God willing.