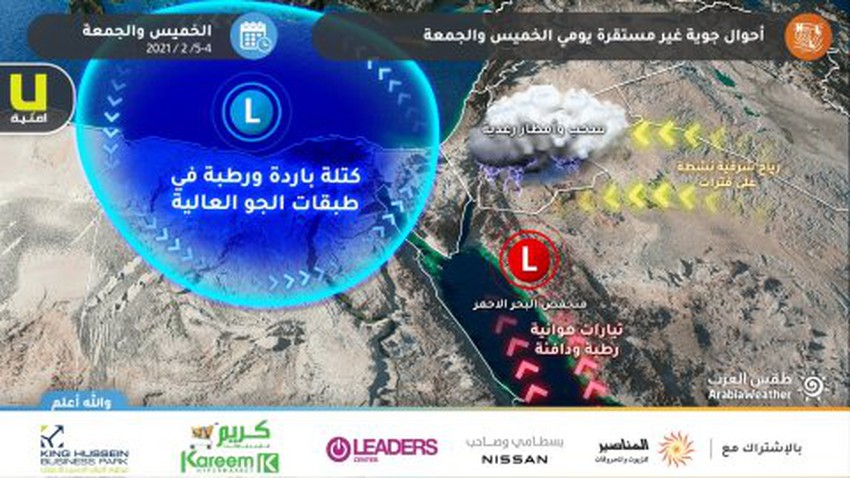 ArabiaWeather - Eng. Nasser Haddad - It is expected that the region will be affected by a state of atmospheric instability that will result in the proliferation of cumulus clouds and renewed chances of rain in various regions of the Kingdom, especially on Thursday and Friday 4 and 5 February 2021, God willing.

Know when the rains began

The chances of rain start on Wednesday / Thursday night and Thursday dawn in a limited manner concentrated in limited areas in the south of the Kingdom, provided that the chances and intensity of rain improve in the southern regions, including the city of Aqaba, in conjunction with the spread of rain clouds with varying intensity towards the rest of the Kingdom gradually over hours Day and evening.

It is not excluded that the intensity of rain will be heavy for some time, which increases the chances of torrents forming. It is also expected that wind movement will be active locally during the period of the effect of thunderstorms.

What is the scientific reason for this weather condition?

These expectations of renewed chances of rain come as a result of the approach of an atmospheric depression in the high air layers across Egypt and the eastern Mediterranean, accompanied by a cold and moist air mass, leading to an effective surface response to the Red Sea depression from the south and accompanied by warm and humid subtropical air currents in all layers of the atmosphere.

This convergence between the cold mass of the west and the warm from the south, leads to the emergence of a great air turbulence in the atmosphere, especially on Thursday , and the proliferation of clouds, which will be of the cumulative type, which means rain in the form of showers that may be heavy and thunderstorms sometimes.

The chances of rain remain available in various regions, God willing, on Friday, and we will issue more news and weather updates in the coming days.