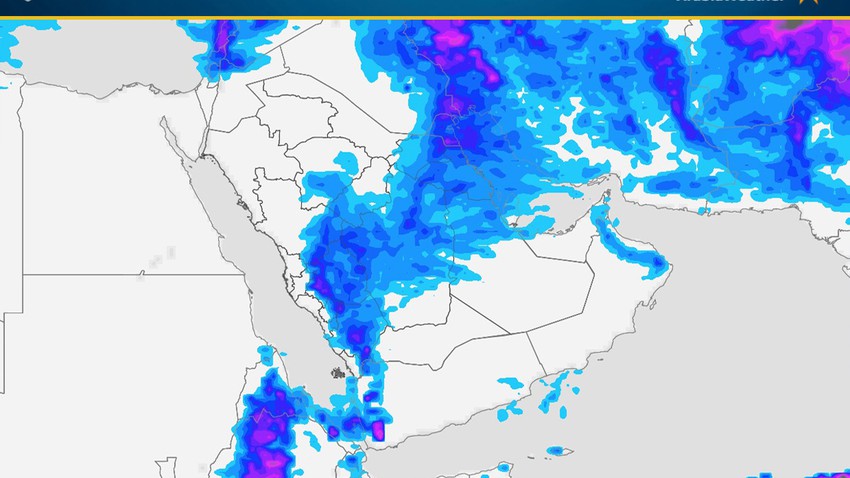 Arab Weather - Data received from numerical models operated by "Arab Weather" indicate that parts of the Arabian Gulf are affected by unstable weather conditions throughout the current week, with varying intensity from day to day.

After a long wait, the chances of rain improved in parts of Saudi Arabia

Hot to very hot weather prevails in most regions of the Kingdom, with the exception of the southwestern highlands and the northern regions, where the weather is more temperate, and random parts of the central and eastern kingdom and the southwestern highlands of the Kingdom are affected by unstable weather conditions during the first half of this week, so that the opportunities for the formation of Rainy thunder clouds, and as of the end of the week, as a result of the concentration of an air height on the Arabian Sea, supplying the Red Sea depression with moisture, which would cause widespread air disturbances, especially in the western regions.

Local rains in parts of the Hajar Mountains

The weather will be hot during the coming days in general in most of the governorates of the Sultanate, and the winds will be moderate to brisk, causing dusty weather from time to time, especially in the Governorate of Dhofar. Daylight hours, as a result of the formation of an atmospheric depression in the Sea of Oman, which contributes to the eruption of moist eastern tropical winds towards the region, leading to scattered thunderstorms accompanied by active descending winds.

A hot atmosphere prevails over the UAE this week, with more moderate weather in the heat in some coastal areas, and as of Sunday afternoon, the opportunity is ready for the development of cumulonimbus clouds on the northeastern mountain range of the UAE , so that the opportunity is created for thunderstorms of rain that sometimes accompany Showers of hail.

The chances of rain continue until the middle of the week

The briskly easterly winds blow in the southeast, raising dust and dirt in some areas, in a hot and unstable atmosphere, so that cumulus clouds multiply and thunderstorms of rain fall at separate intervals until the middle of the week.