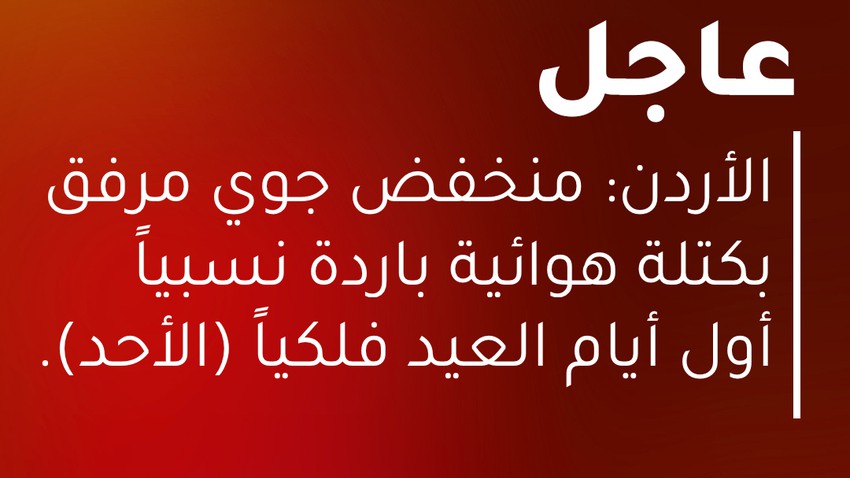 Weather of Arabia - the latest weather maps readings indicate that the heat wave that affected the Kingdom for nearly a week will end on Saturday because of the receding hot and dry air mass that causes it away from the Kingdom, where the atmosphere returns to what it is used to be spring, but the same maps indicate that There is an air depression expected to rush towards the eastern Mediterranean and the Levant on Sunday (the first astronomical day of Eid) and is accompanied by a relatively cold air mass coming from the eastern European continent.

An air depression in the last week of May is considered unusual and rare, and this year it has been repeated twice. The time period is still relatively far to classify the low airspace and delve into the precise details of it due to the possibility of changes in the scenarios accompanying it, but the weather forecast team expects that there will be a significant and sharp decrease in temperatures on Sunday and turn to become below their rates for such a time Of the year by about 5-7 degrees. The weather is also expected to turn cold and partially cloudy in general in most regions except Aqaba, and the opportunity will be provided for separate showers of rain, God willing, in some areas, thunder may be accompanied sometimes, especially in the north and central of the Kingdom. The winds will be an active west wind, with occasional strong gusts of dust and perhaps sandstorms in desert areas.

The impact of this depression may extend during Monday, but things are still unclear.

1) Attention from the thermal inversion and the significant change in temperature expected during the coming period.

2) Attention from low horizontal visibility in desert areas due to dust and excitement.