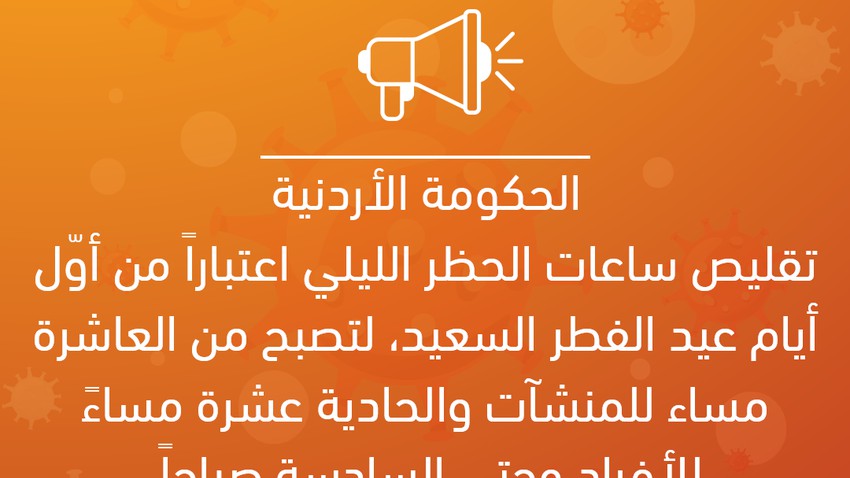 Prime Minister Dr. Bishr Al-Khasawneh issued a communiqué based on the provisions of Defense Order No. 19 of 2020, according to which the night ban hours were reduced, starting from the first day of Eid Al-Fitr. So that it becomes available for individuals from eleven in the evening until six in the morning for all days of the week, and for establishments from ten at night until six in the morning on all days of the week; With the exception of establishments whose work the Prime Minister decides otherwise.

The government confirmed that this communication and the reduction in the hours of the nightly ban on individuals and establishments as of the first day of Eid Al Fitr, comes within the framework of the safe, gradual mitigation measures that the government takes in accordance with the developments of the epidemiological situation leading to the strategic goal of reaching a safe summer in which most sectors and the economic wheel have returned Its nature is completely through the application of health protocols and adherence to vaccinations.

The government pointed out that the bet remains on the commitment of citizens and facilities to public safety measures.

The government affirmed that it would move forward in the balance between preserving the citizen's health and sustaining economic activities, and taking mitigation measures in accordance with the developments of the epidemiological situation.

The government indicated that our arrival for the summer of security means opening most sectors early next July and also returning to face education in schools and universities next September, coinciding with the arrival of the vaccination campaign to advanced stages for individuals and workers in various sectors and establishments, all of which are safe and recognized vaccinations registered with Jordanian health institutions. And global.

Where are you? (protected shelter)