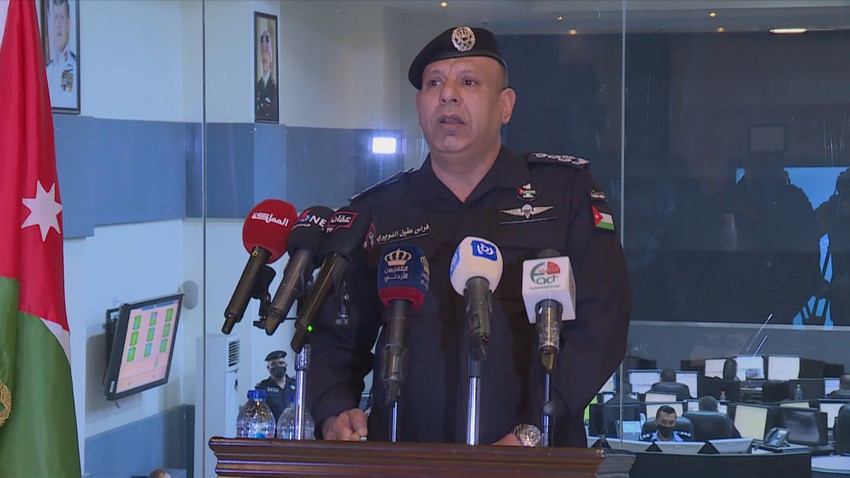 Arab Weather - The Director of the Directorate of Operations and Control in Public Security, Brigadier General Firas Al-Duwairi, announced, on Wednesday evening, that all Jordan roads are passable except for the Sharif South Road, in light of the start of snowfall in several areas as a result of an air depression affecting the country, with snow falling in the Karak region. Tafileh, Shobak Brigade, and Ras al-Naqab, as the roads in these areas are open with caution.

Al-Duwairi spoke during a briefing that the Operations and Control Directorate had received 13,000 calls since Wednesday morning, including 1,324 calls for civil defense, and 5,000 calls to respond to citizens' inquiries and questions.

He pointed to the occurrence of many traffic accidents, 18 cases related to the weather situation, indicating that the Directorate of Public Security, Civil Defense and the Advanced Patrols dealt with them and the observations were addressed.

He said that 631 sick cases were dealt with, as the Civil Defense Directorate worked to transfer and facilitate 134 cases of dialysis, and the transfer of 37 cases related to the Corona virus pandemic, in addition to 15 birth cases since entering the depression, as they were facilitated and transferred through ambulances and rescue services for the defense. In addition, 4 cases of suffocation were dealt with.

He continued, "The 911 application and the WhatsApp station received 12 reports, which were dealt with directly. The external patrols, traffic patrols and emergency patrols dealt with many observations and were addressed in the field."

He added that many services were provided to a group of tourists in the south and Petra.

Al-Duwairi reported that there have been 39 fires since the early morning, and none of them were related to the depression.

He referred to the situation of the forces in a state of immediate warning to serve the citizen, in addition to activating the security and traffic plan capable of meeting the needs and immediate response.

"We count on citizen awareness and work in strategic partnership with our partners to overcome all difficulties, namely the Municipality, municipalities and the Ministry of Works and Water, and we are working in coordination with the meteorologist," according to the Directorate of Operations and Control in Public Security.

He called for avoiding areas prone to the formation of torrents or high water levels, and not to risk leaving vehicles unless necessary, in addition to safe handling of heating devices, and fixing moving and falling objects.

He called for mitigating as much as possible the movement of vehicles because of the obstruction and confusion they cause to the public security movement.