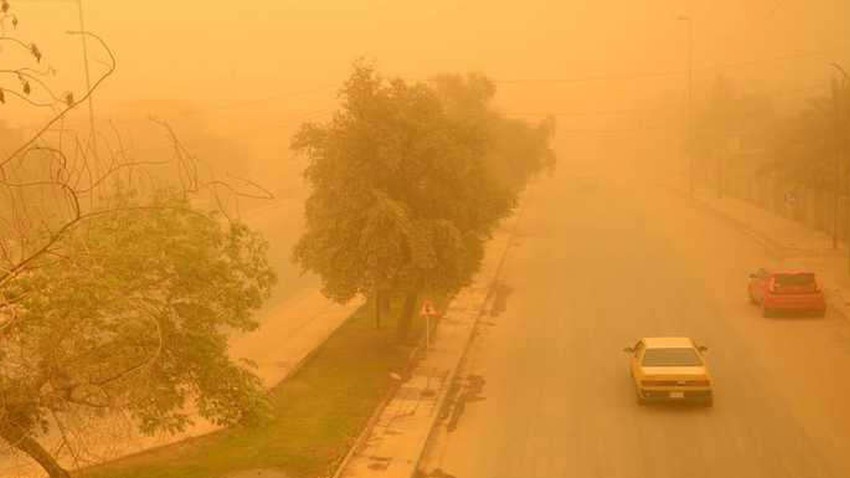 Weather of Arabia - Today, Monday (May 23), Iraqi hospitals received dozens of cases of suffocation due to the dust storm sweeping the country.

#dustwave
A difficult reality that Iraq is experiencing with the recurrence of the formation of dense dust waves.. The scene a little before #Karbala pic.twitter.com/sBUuw2ZFgw

Scenes of thick dust a while ago in the capital, Baghdad - Iraq pic.twitter.com/NXZPZJz6me

And the Iraqi government announced the suspension of working hours in all official institutions in the country, with the exception of the health, security and service departments, due to bad weather conditions and a heavy wave of dust.

Health sources said that hospitals in Anbar Governorate received 47 cases of suffocation and shortness of breath due to the dust storm.

For his part, the Minister of Education, Ali Al-Dulaimi, announced that it was decided to postpone the exams for sixth grade students and the unfinished classes on Monday, to the next day and on the same announced schedule, due to the bad weather conditions, and in the interest of the safety of our students and students.

The Baghdad Airport Administration also issued a statement, saying: "The Baghdad International Airport administration would like to make it clear to all our valued passengers and airlines operating at the airport about the closure of the airspace and the suspension of air traffic at the airport for this Monday, due to dust storms."

And she explained that "the visibility is up to 400 metres," noting that "passengers will be informed of the nature of any emergency developments due to the weather conditions affecting the country."

See also: TV interview | What are the reasons for the recurrence of dust storms recently? And solutions to mitigate its damage