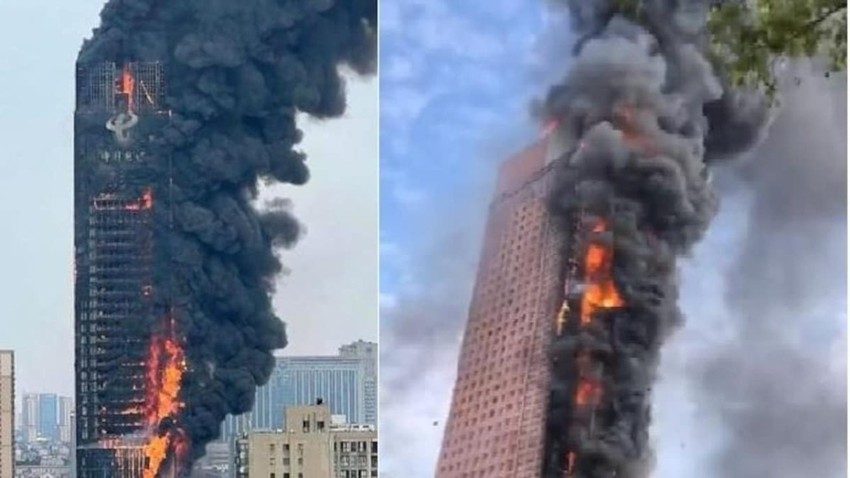 Weather of Arabia - A massive fire broke out in a 42-storey skyscraper in the city of Changsha in central China, as thick smoke rose from the site while the fire was raging strongly on several floors of the building.

The fire broke out in a tower that houses the offices of China Telecom, one of the country's largest telephone companies.

Massive #fire in #Changsha , #China . Hope everyone will be safe! pic.twitter.com/VbcQfR2MSj

Pictures and videos showed a horrific scene of fire burning in the building, which is located in a residential area, while a cloud of black smoke formed in the air, and the fire devoured the building within minutes, until the facade of the tower turned black as a result of the fire.

Still not much foreign news on UK media for obvious reasons, so in case you missed this:

A China-Telecom skyscraper in #Changsha , #Hunan province, completely burned down in just 20 minutes.

Some say hundreds may be dead. Claims that 35 tons of fuel for servers were stored there pic.twitter.com/SbCOmp1Y7i

WATCH: High-rise engulfed in flames in Changsha, China; No victims reported so far according to state media pic.twitter.com/8EJS8f6aVa

The telecommunications company said that the fire was put out at 4:30 pm (local time) and that telephone lines and mobile Internet services are now operating regularly. It did not report whether there were injuries.

Building fires are common in China. In July last year, a warehouse fire in northeastern Jilin Province killed at least 15 people, injuring 25 others. In June of the same year, a fire at a martial arts school in Henan Province killed 18 people, most of them children.

Article 2 experiment: Arabia's weather: the state and news of the weather and the temperature today and tomorrow

Jordan - Update 5:15 PM: Renewed rain in different parts of the north and center of the Kingdom