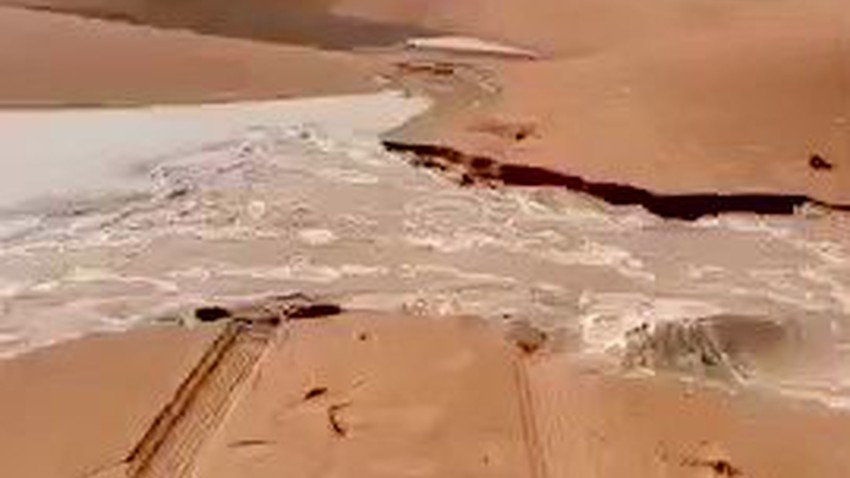 Social media pioneers circulated videos of the majestic scene of water flowing through the sand, after the region witnessed heavy rains during the past days.

#elite | Fresh groundwater flows from the ground in the Empty Quarter desert in a rare incident. pic.twitter.com/wlCPv7eoLJ

#elite | Fresh groundwater flows from the ground in the Empty Quarter desert in a rare incident. pic.twitter.com/wlCPv7eoLJ

In turn, weather and meteorology expert Dr. Khaled Al-Zaqaq explained to Al Arabiya.net that the world is now living in an era in which climate changes have become a universal and indisputable reality, stressing that these changes are inevitably coming, as he put it.

He also added that these changes are divided into two parts, which will be in the interest of Arab countries, while they will have a negative impact on European countries and some Asian countries.

He pointed out that the Arabian Peninsula will witness these changes from its north to its south and east to its west, citing the remarkable changes that the southwestern part of Saudi Arabia, called the Empty Quarter, is experiencing.

He added that it was called the "Empty Quarter" in the past due to the emptiness of life in it due to the lack of rain.

Lately, it has started to rain every year , and the valleys buried within the sands of the Empty Quarter have come to life again, and this is conclusive evidence that climatic changes are inevitably coming, according to him.

Secrets of the Empty Quarter... a wealth of water under the sand

Several years ago, the Geological Survey of Saudi Arabia issued a 400-page book entitled " The Empty Quarter...The Great Sea of Sand " in which it erases the prevailing belief that the Empty Quarter desert, which is the largest sand desert connected to the world, covers an area of 550,000 km and covers 22% of the Kingdom's area. They are just desolate and desolate dunes.

And that the Empty Quarter represents a sedimentary basin surrounded by hills from most directions, which was reflected in the slope of many water courses towards it, leading to a great wealth of water under its sands, as evidenced by the massive spread of manual wells of all kinds, in addition to the water traps spread there.

A Saudi report revealed that the interior of the Empty Quarter contains great water wealth and fresh lakes, whose composition dates back to the "Upper Pleistocene" and "Lower Holocene" eras, in addition to some ancient settlement sites on its outskirts and surroundings.

Researchers have revealed that the Empty Quarter includes the remains of the third largest lake in the world, and a network of rivers that flowed 6000 years ago. So does what we are witnessing now of exceptional rains and the flow of fresh water in the Empty Quarter desert indicate the return of the Arabian Peninsula to green meadows?!

Watch also: video | "Keshta" by planes and breakfast of another kind in the atmosphere of the Saudi desert