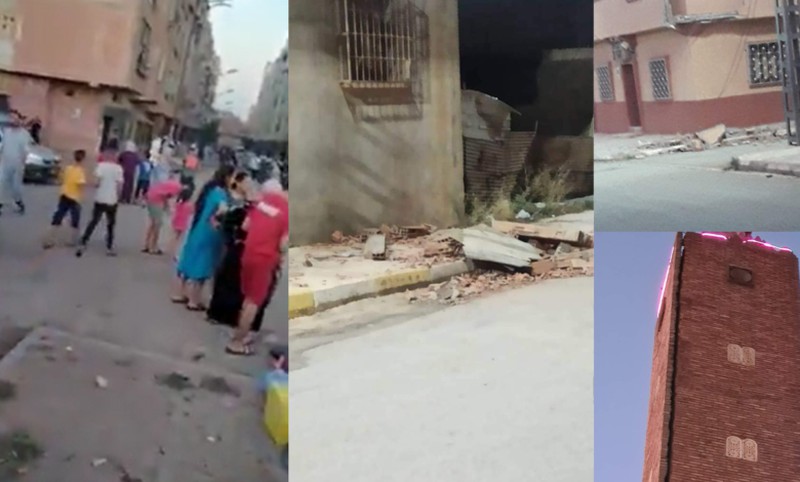 Arab Weather - A 5.1-degree earthquake hit areas in the province of Oran in northwestern Algeria yesterday evening, according to local media. The reports, quoting from the Research Center for Astronomy, Astrophysics and Geophysics, stated that the epicenter of the tremor was 12 kilometers north of the Qudil region.

The tremor occurred at around 20:17 local time (19:17 GMT), and its epicenter was 12 kilometers north of the Qudil region, according to the Research Center for Astronomy, Astrophysics and Geophysics.

It should be noted that the city of Oran has been hosting the Mediterranean Games since Saturday, with the participation of more than 3,000 athletes.

Residents of old buildings in Oran left their homes during the earthquake, while others went to watch parts of their buildings fall to the ground. And the pioneers of social media circulated, video clips, from Algeria at the moment of the earthquake:

Violent earthquake and residents of Oran left their homes
O God, you are God, there is no god but you.. you are the rich and we are the poor. We are your servants, the sons of your servants. pic.twitter.com/lU21Y9fbtw

#Oran_earthquake
common
The collapse of a fragile building due to the earthquake, God willing, Salamat pic.twitter.com/dhF9ilVpJT

Algeria has already been exposed to many devastating earthquakes, such as: the Chlef earthquake in 1980, a previous earthquake in the same area in 1954, and an earthquake in 1989 that killed at least 30 people, and Algeria was hit by a very strong earthquake on 05/11/2003 Boumerdes hit northern Algeria, the most powerful since 1980 in the north of the African continent. Material losses exceeded $500 million.

Most of these earthquakes occur in a boundary zone between two continental plates, the Eurasian plate and the African plate. Along this part of the point of convergence between the plates, the African plate moves northwest toward the opposite Eurasian plate by 6 mm per year, and these movements lead to the occurrence of tectonic pressures. Which causes earthquakes by collision and collapse.