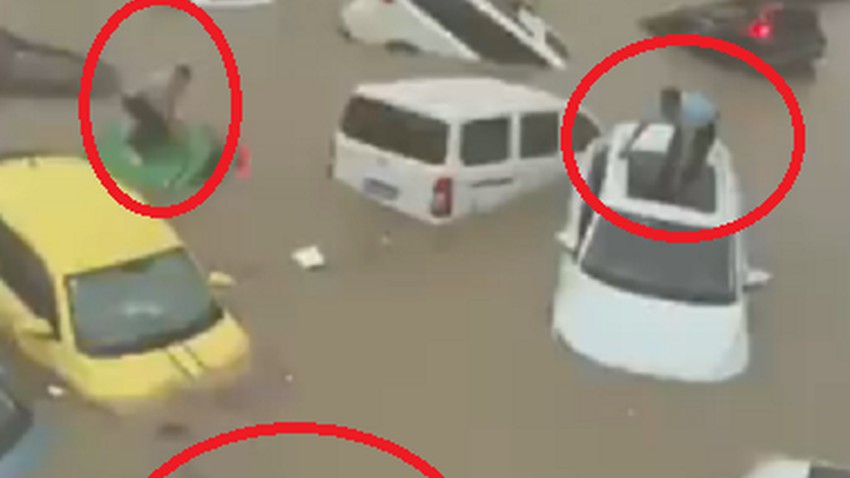 Arab weather - horrific scenes of a real disaster in southern China's Henan Province, where the province is exposed to a wave of historical floods resulting from the direct effects of a series of unusual rainstorms, which brought with them very heavy thunderstorms and unprecedented amounts of rain.

#Henan #Zhengzhou I didn't expect the car could be a boat . It's a big loss. #today #China #NEWS #Truth #helloworld pic.twitter.com/RdmwlXhvA6

According to "Al Arabiya Net", Chinese President Xi Jinping appeared on television screens today, Wednesday, and said that his country was facing "extremely dangerous" floods that caused the death of 12 people in the city of "Zhengzhou", who died in the worst wave of water invasions, torrential rains and car floods. "The dams of some reservoirs exploded, causing serious injuries and loss of life and property," he described what is happening as reaching a dangerous stage, which was reflected in pictures and videos crowded on the communication sites, showing passengers stuck in a train carriage, flooded to their shoulders.

The agencies also quoted a Chinese military source confirming the emergence of a 20-meter-long crack that could “at any moment” lead to the collapse of the Luoyang City Dam, which has a population of more than 7 million in Henan Province, after unprecedented heavy rains that killed 3 people and paralyzed the city’s movement. Another province, Zhengzhou, more than 700 kilometers from Beijing, with a population of 10 million, was on alert after the subway was flooded, as shown in the displayed video.

More than 10,000 people have been precautionary evacuated in recent days, according to local authorities, who estimated losses earlier at several millions of dollars, which is what China witnesses almost every summer, as floods breed due to seasonal rains, such as the one that occurred last year and led Thousands of people have been evacuated from the dangers of a series of rare and heavy rainstorms.

The state-run CCTV channel broadcast pictures of Zhengzhou streets flooded with torrential torrents of muddy water, while a number of residents were pushing their vehicles across the flooded roads, all due to the severe waterlogging of the soil, which effectively paralyzed the traffic on the city's roads. More than 80 bus lines have been suspended, and more than 100 lines have been temporarily diverted, in addition to the temporary suspension of the subway service. Zhengzhou Airport also canceled 260 flights to and from the city, and the local railway authorities stopped