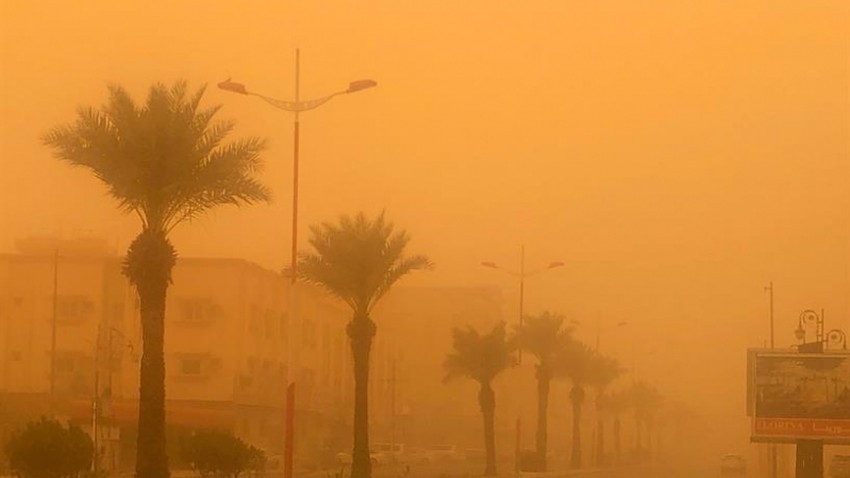 Weather of Arabia - During the past 48 hours, social networking sites were buzzing with scenes documenting the strength of sandstorms that struck many countries in the Arabian Peninsula, causing severe confusion, many accidents, temporary closure of some airports and suspension of flights due to the lack of horizontal visibility due to dust.

It was launched from Jordan and carried millions of tons of dust to Iraq, Saudi Arabia and some Gulf countries

This broad dust wave resulted from the impact of the Eastern Basin region of the Mediterranean and the Levant on Thursday by an air depression accompanied by a cold air mass, coinciding with the presence of another, hotter air mass in the south of the Arabian Peninsula, which flowed with strong northwest winds. Jordan and moved towards Iraq and the regions of Al-Jawf and the northern borders in the Kingdom of Saudi Arabia, and deepened additionally within its lands to reach and strongly to Hail, Al-Qassim, the whole of Riyadh and the eastern parts of the Kingdom, and sandstorms strongly affected Kuwait, Qatar and Bahrain, with a horizontal vision that did not exceed 200 m sometimes.

Tweeters transmitted on the social networking site Twitter a video clip showing the moment the sand storm started from the border areas between Jordan and Saudi Arabia, and the clip shows the high dust density and the lack of horizontal visibility inside Jordan, and the complete cessation of vehicle movement

Attention
The intensity of dust waves now on the border with Jordan
The clip monitors the complete cessation of vehicle movement due to the lack of visibility within the Jordanian borders pic.twitter.com/bAYmeQm3Fh

Social networking sites were also buzzing with many scenes that show the intensity of the dust that hit Kuwait with the hours of Friday morning, and the scenes show the disappearance of the landmarks of Kuwait City behind a curtain of thick dust, while the horizontal vision shook to 200 m.

Large parts of northern, central and eastern Saudi Arabia, including the city of Riyadh, witnessed waves of thick dust, which hid the city’s landmarks, and the horizontal visibility at Riyadh Airport was noticeably absent.

See
Pilot Yazeed Al-Khelaiwi captures scenes from the cockpit of the plane due to the intensity of dust and lack of visibility at Riyadh airport today @Capt_yazeed pic.twitter.com/qlEaj63Wrf

Heavy dust in Qatar and suspension of flights at Bahrain Airport