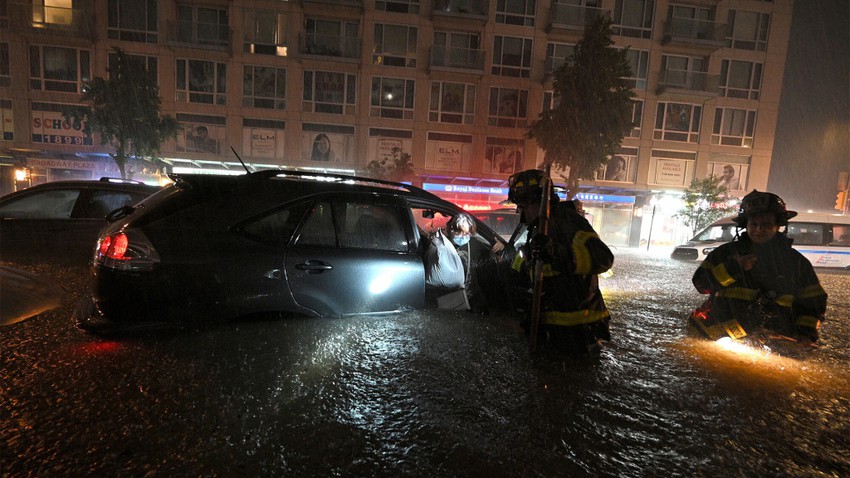 Arab Weather - For the first time in New York City, the US Meteorological Service issued an emergency warning of flash floods and flash floods yesterday, Wednesday, as the remnants of Tropical Storm Ida caused heavy rain and the possibility of torrential rains and hurricanes in parts of the North Central Atlantic.

New York Mayor Bill de Blasio declared a state of emergency shortly before midnight on Wednesday, saying, "Tonight we are witnessing a historic weather event with record rain across the city, and massive flooding that has put the city in dangerous conditions."

For her part, New York Governor Kathy Hoshol wrote in a tweet on Twitter, "I am declaring a state of emergency to help New Yorkers affected by tonight's storm," after Ida, which formed a Category 4 hurricane, hit the southern United States on Sunday, causing tornadoes and floods as it rushed north.

The floodwaters inundated subway lines and streets in Manhattan, Brooklyn and New Jersey. The storm killed seven people in New York City and one person in Passaic, New Jersey, and left thousands of New Yorkers without power.

The Port Authority of New York and New Jersey, which operates Newark Liberty International Airport, suspended all flights and closed all parking due to severe flooding. All train services to the airport have also been suspended.

A video clip showed parts of the airport submerged in water.

Governor Phil Murphy declared a state of emergency in all 21 New Jersey counties, urging people to stay away from flooded roads.

The Metropolitan Rail Authority announced that services will be "extremely limited tonight due to heavy rain and flooding across the region" and "strongly" recommended that travelers avoid travel if possible.