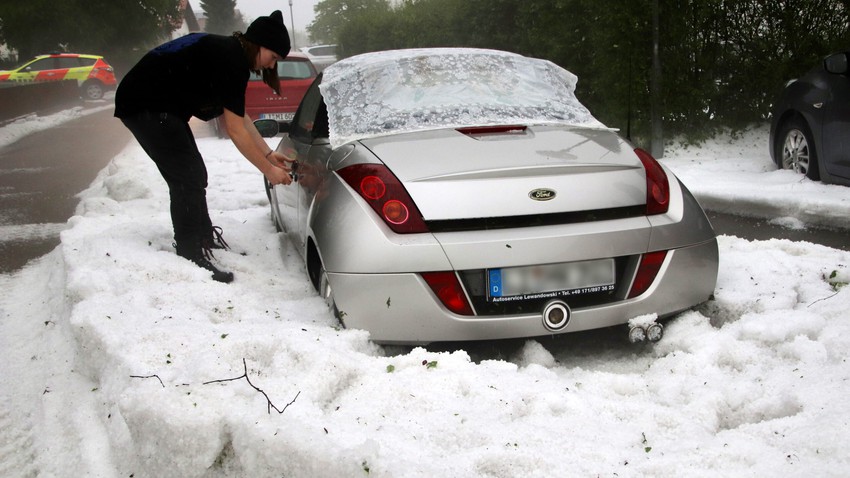 Weather of Arabia - Areas in southern and western Germany witnessed, on Sunday, severe hailstorms, until the accumulation of hail in some areas reached half a meter, which briefly turned many streets, squares and parks into a winter panel covered with a thick layer of cold despite temperatures around the s.

The hailstorm resulted from a strong state of atmospheric instability as a result of the confluence of cold, humid western air currents, with warm air, which led to the emergence of a state of atmospheric instability and the formation of thick cumulus clouds, thunderstorms, and hail falling heavily within a short period of time, and in large sizes until it reached a diameter Some hail 7 cm.

Read also: What is a hail? And why does it fall in large sizes in the summer?

The dense cold covered some streets and roads with a thick white layer that closed the roads, forcing the mechanisms to intervene to remove the accumulated cold, especially in the village of Wheeler, in the state of Bavaria in southwestern Germany. .

Heavy rain also hampered the ongoing investigation and rescue of a train derailment in Bavaria on Friday, which killed at least 5 people and injured dozens.

Topics that interest you:

Why is breathing cold air more refreshing than warm air?

Kuwait: Very hot weather and rising dust and dust in open areas during the weekend

Jordan - Update 5:10 PM: condensation of cumulus thunderstorms over several parts of the southern Badia, including the Mudawwarah area