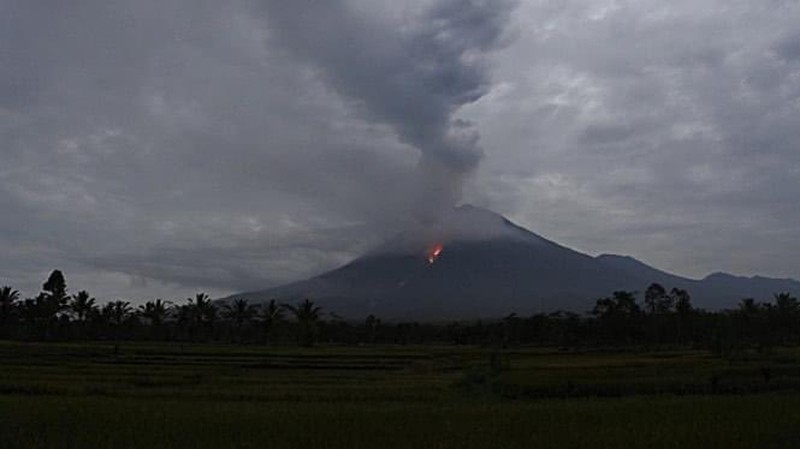 Weather of Arabia - The "Semeru" volcano erupted on the island of Java, Indonesia, in the early hours of Sunday morning, which led to a column of ash rising into the air for a distance of 1.5 km, which prompted the authorities to warn residents not to approach the eruption area.

And raised the Indonesian authorities at a later time the warning level of the eruption of the volcano to the fourth level, which is the highest level.

Indonesia's disaster mitigation agency said in a statement that the volcano began erupting at 2:46 am (1946 GMT Saturday). Video clips posted on social media showed gray clouds in nearby areas.

CCTV footage of Mount Semeru erupting in East Java prompted authorities to issue a maximum danger warning for the volcano eruption and advise residents in the area to evacuate immediately. #Indonesia pic.twitter.com/44CqTMr0fP

New eruption of the #Semeru volcano, located on the island of #Java , #Indonesia

The column of smoke and ash rose approximately 1,500 meters above the summit and dispersed to the southeast. #volcano #news #eruption #Viral

Its just getting worse :( #semeru #volcano #eruption Link to live stream in comments. go and check them out. pic.twitter.com/rwwVlrlhrF

Another - New eruption of the #Semeru volcano, located on the island of #Java , #Indonesia

The column of smoke and ash rose approximately 1,500 meters above the summit and dispersed to the southeast. #volcano #news #eruption #Viral

Indonesia's disaster mitigation agency warned residents not to undertake any activities within 5 km of the eruption center and asked them to stay 500 meters away from river banks due to the dangers of lava flow.

The Japan Meteorological Agency said it is monitoring the possibility of tsunamis there after the eruption, Japan's NHK reported.

The eruption of the Mount Semeru volcano comes a day after a strong earthquake occurred on the island of Java, Indonesia, which caused panic and pushed people into the streets. The US Geological Survey estimated the earthquake's strength at 5.7 degrees, and said that its epicenter was 18 kilometers southeast of Banjar. , a city located between the provinces of West Java and Central Java, adding that it was at a depth of 112 kilometers. The earthquake injured a resident in Silawi village, Garut district, West Java province, and at least four houses and a school were damaged.

The country, which has a population of more than 270 million people, is frequently exposed to earthquakes, volcanic eruptions and tsunamis because it is located in an area called the "Ring of Fire" in the Pacific Ocean, where earthquakes and tremors are frequent.