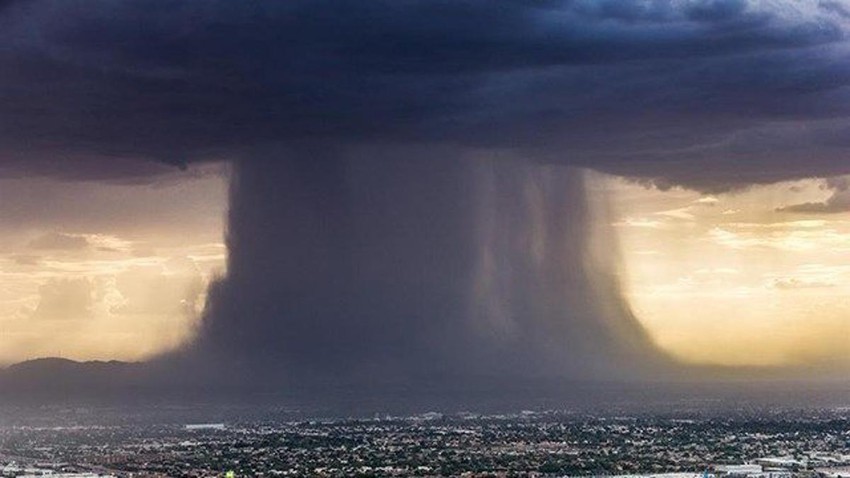 Weather of Arabia - A weather amateur lens observed this Sunday afternoon a rare scene of what is known as the dangerous "microburst phenomenon" in the Sinaw District - Al Mudhaibi State in the Sultanate of Oman.

# See precipitation in behalf of Snowe - the state Almuseiba
Sultanate of Oman a while ago
God willing pic.twitter.com/ZBSuLxkFMN

The phenomenon of "Microburst" is known as the phenomenon of strong downward winds, which is associated with thunderstorms in which one cloud rains heavily over a small and specific area. Wind and water recoil is scattered in all directions due to the force of the fall focusing on the area.

The "contact stage": the moment when the downward wind contacts the ground (the highest wind speed)

Outburst stage: The moment when the wind spreads from the point where it meets the ground

The Cushion stage: It is the last stage at the moment when the wind stretches and moves away from the point of its meeting with the ground, where a sharp decline in wind speed occurs due to the process of friction with the ground.

The phenomenon of "microburst" poses a particular danger to aircraft, especially during landing, due to the downward winds caused by the storm, as many accidents occurred because of it.

under surveillance | Arab Weather is watching the formation of a tropical situation in the Arabian Sea at the end of this week, and these are its most prominent possible paths