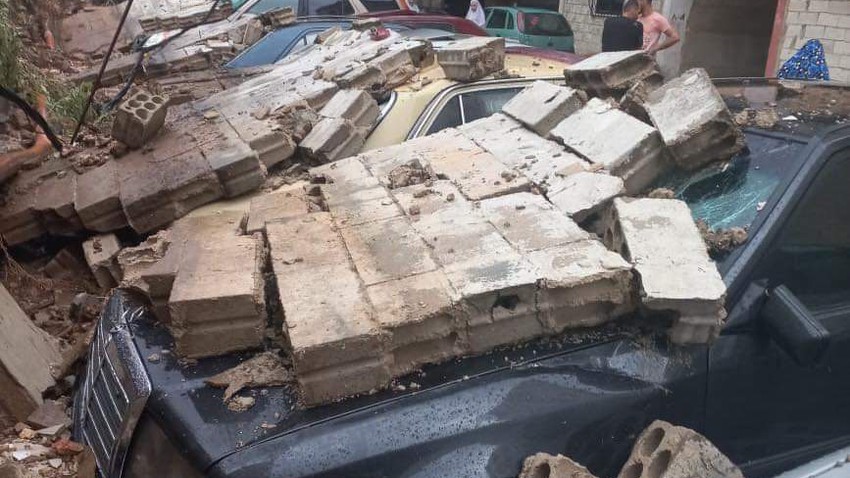 Arab weather - Severe and unprecedented thunderstorms for this time of year swept the Syrian coast, northwest of the country, and parts of Lebanon today, Saturday (June 25), accompanied by strong gusts of wind similar to hurricanes, and those areas witnessed heavy rain and hail, a condition Rare rains in this month of the year in light of the dominance of hot weather in some areas for several days.

#watch | The lightning radar for Arab weather monitors the strength of the thunderstorm that affected Lebanon and the Syrian coast at dawn today .

The effects of the storm on Lebanon

In Tripoli, the storm led to the fall of a palm tree in the Tabbaneh area due to the intensification of wind speed and heavy rain that the city has witnessed since the early morning, in addition to the high water level inside the Minieh tunnel.

Heavy rain led to the accumulation of water on the bridge separating the dome and Abi Samra, which led to the breakdown of a number of cars, and obstructed traffic in the area.

A number of cars broke down on the bridge separating the dome and Abi Samra due to rain pic.twitter.com/QztfvS8vte

In the Metn, hail fell, rain fell profusely, and torrents swept the streets of cities, while the waves of the sea rose.

In the Bekaa, the large amount of rain led to the slipping of dirt and stones and the closure of the breeders' inventory road that connects the Denniyeh area to Hermel.

The stormy weather also caused significant damage to the agricultural sector, breaking the branches of some forest and fruit trees, damaging a number of greenhouses, uprooting trees and shoveling earth. It also led to the flying of some tin plates and the fall of a number of billboards spread on the sides of the roads, and the flying of water tank covers located on the roofs of houses, in addition to the interruption of electrical wires, which led to a power outage in some areas.

For more: Learn about the scientific reason behind the historical thunderstorms that affected Syria and Lebanon with the beginning of the summer days

The effects of the storm on Syria

The impact of thunderstorms on the Syrian coast began with the early hours of dawn and spread to the central regions, where the storm led to the uprooting and fall of some trees, the fall of billboards in the roads and a number of electric poles, and a cut in the electrical network cables. Lattakia Governorate was the most affected area.

The storm that struck Latakia since dawn led to 4 deaths, as a citizen died in the Masyaf countryside (Qurain village) due to being struck by lightning directly while on his land, which led to his death, and a fisherman died in the city of Latakia, as well as an electrician died in Idlib after falling due to strong winds And a girl died because a wall fell on her in a peaceful city, may God have mercy on them all.