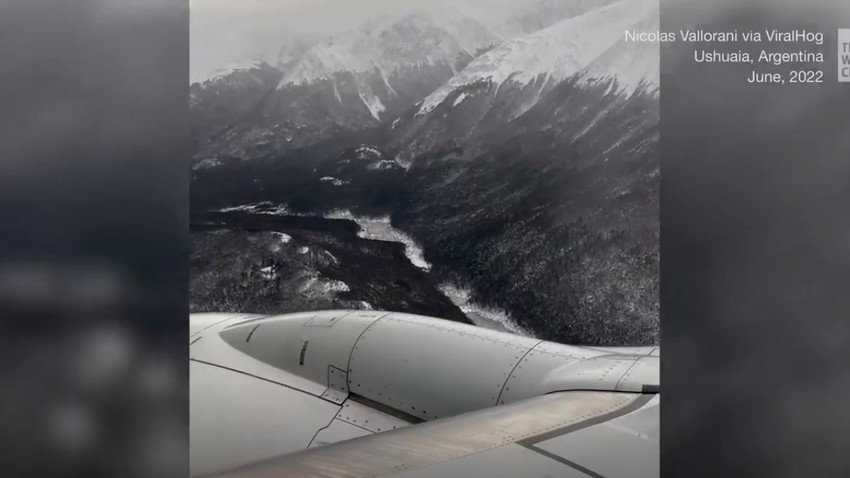 Weather of Arabia - Riding a plane may be one of the most exciting and enjoyable activities during travel, to find yourself suspended in the air at a height of thousands of meters, passing over the various terrains of the earth and through soft clouds, but the scene may suddenly change when the plane passes through turbulence, the plane begins to shake and tilt , with sudden ups and downs in height!

The following video clip, which was taken two days ago, shows the horror moments spent by passengers on a flight to Ushuaia in Argentina, when the plane began entering an area of ​​air strikes while flying over the Cordillera de Andes. The plane will fall.

The Andes Mountains are a very large mountain range that extends along the continent of South America, on the western side of the continent next to the Pacific Ocean. With a length of 8,500 km, it has the highest peaks in the world after the Himalayas with an average elevation between 3,000 and 4,000 m above sea level, and Aconcagua is the highest peak in the chain with an elevation of about 7.000 m.

Therefore, flying over it is a great challenge for pilots, as this large natural wall often causes severe air turbulence due to a phenomenon called "Mountain wave". Especially in the area between Chile and Argentina.

More: What are turbulences? And what are its types?

The mountain wave has caused fatal accidents for aircraft throughout history, as a crash occurred in Spain in 1953, of a plane belonging to the Spanish airline Aviaco flying from Bilbao and Madrid when it encountered a mountain wave and crashed, and investigations showed that the weather conditions that prevailed during the flight (before and during the occurrence of accident), related to the mountain wave that caused the accident.