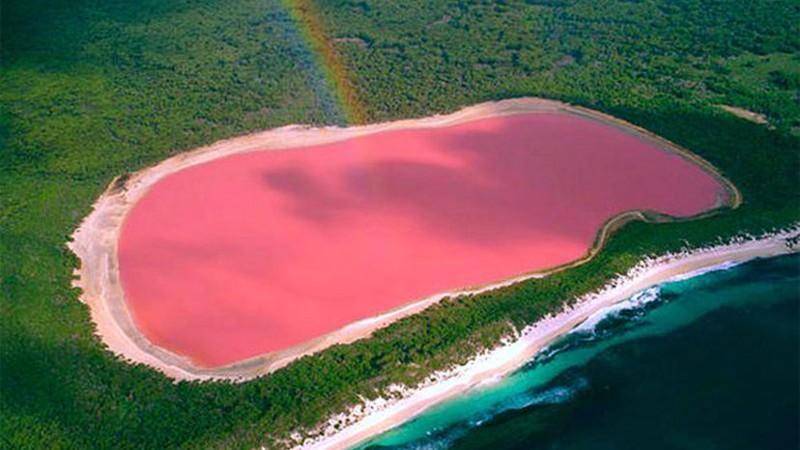 Arab Weather - We humans stand amazed when contemplating the creation of God Almighty. Amidst the beauty of nature full of amazing colors, we find unfamiliar scenes that fascinate us. Have you ever imagined seeing a pink lake? Deliciously looks like pink cotton candy!

Lake Hillier, which is located on the Central Island off the coast of Western Australia, is perhaps one of the most famous pink lakes, which provides the most beautiful uncommon natural scenes, especially when viewed from the top in the green land and with the turquoise bay opposite it, but why are these lakes pink?

The reason for the pink color of the lakes

This has been a mystery for several years, but the puzzle has finally been solved. Scientists have found that bodies of pink water like Lake Hillier contain a type of bacillus called " Halobacteria " and a type of algae known as " Dunaliella salina ", which live in salty environments and are attracted to To the high levels of salinity found in the waters of these lakes .

The pink color is due to the red carotenoid pigments produced by both bacteria and algae. These algae also live in the Dead Sea.

While some of these lakes are still used to extract gypsum - a soft sulfate mineral used as fertilizer , some lakes are left so that visitors can enjoy their stunning views rich in stunning natural colors, which change according to the seasons, cloud cover, salinity levels in the water, and time of day.

The most famous pink lakes around the world

In addition to Lake Hillier, there are other lakes in Australia when heading to the far east towards Murray-Sunset National Park in Victoria, where stunning views of the four pink lakes, but unlike Lake Hillier, which is pink throughout the year, it is better. Watch the pink lakes of the Murray Sunset in late summer, when the water colors change, varying from deep pink to light pink.

1267 days remain until the next World Cup, in the shortest time difference between the two editions of the World Cup