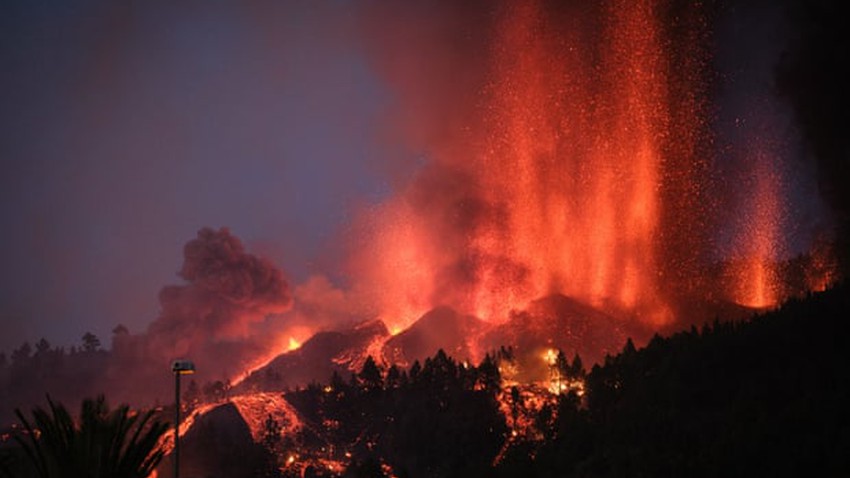 Weather of Arabia - After a 50-year inactivity, the volcano of the Spanish island of La Palma returns to its activity and explodes violently, threatening neighboring villages and agricultural lands.

The volcano of La Palma Island, one of the Spanish Canary Islands off the coast of Morocco, erupted on Sunday evening, throwing lava hundreds of meters into the air, sending flaming rivers of molten rocks that rushed through forests and agricultural lands, and flowed towards homes in villages south of the island, forcing The authorities raised the state of alert to the red level, and evacuated thousands of residents.

One of the flows, several hundred meters long and tens of meters wide, swept into homes, and video footage spread on social media showed lava entering the house.

The President of the Canary Islands, Angel Victor Torres, said in a press conference on Sunday evening, that 5,000 people had been evacuated and there were no reports of injuries so far.

He added, "It is not expected that more residents will be evacuated, the lava is moving towards the coast and the damage will most likely be material."

Earthquakes before the eruption of the volcano

La Palma was on high alert after more than 22,000 tremors were reported within a week at Cumbre Vieja, a chain of volcanoes that last experienced a major eruption in 1971, and is one of the most active volcanic areas in the Canary Islands.

In 1971, a person was killed while taking photos near lava flows, but no property damage was recorded. The first recorded eruption at La Palma was in 1430 AD, according to the Spanish National Geographic Institute.