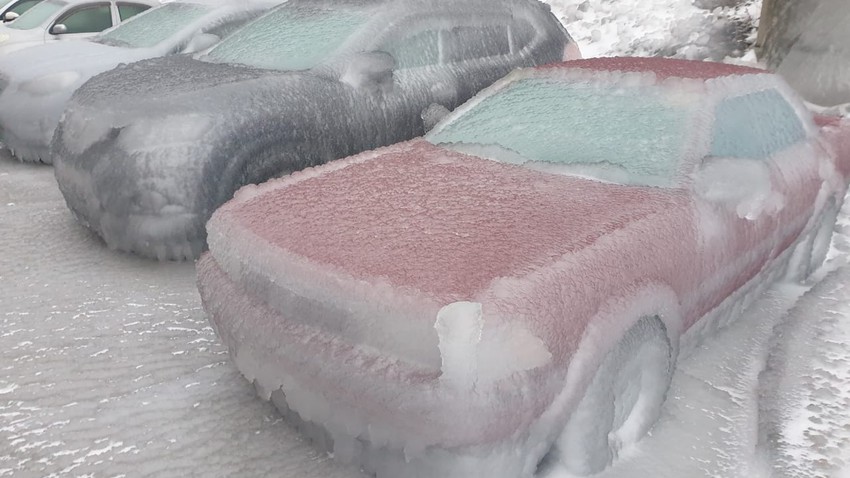 Arab Weather - The city of Vladivostok, in the far east of Russia, was affected by strong winds and icy rain, which led to power cuts and running water for thousands of people, and the government officially announced that what happens is a natural disaster, and at least 120 homes were affected at the beginning of this disaster, and more than From 1500 homes have central heating.

Although the temperatures remained relatively moderate, reaching -1 ° C, but due to heavy snowfall and strong winds, the infrastructure was disrupted and caused great damage to buildings.

Watch the moment of the collapse of a concrete plate due to severe freezing !!

May your mornings be as lucky as this gentleman in Vladivostok who had a very narrow escape, while cleaning snow from his car, earlier today. pic.twitter.com/J8DrKKSRTi

Several people froze to death, over 150000 are still without electricity, water & heating in the Far East of Russia. Local businessmen open restaurants & are out on streets offering free food. Many people get water by melting ice in cooking pans. Video from streets of Vladivostok pic.twitter.com/33NlarRUBf

On the other hand, the accident highlights the concern of city residents that new snow and freezing temperatures negatively affect the former high-rise residential buildings, which are an essential component in many cities in the far east of Russia, and some residents woke up to find their cars completely frozen due to the icy rain that fell. On the area during the evening and dawn hours

Bit chilly in the Far East of Russia pic.twitter.com/McpybNnSa2

In addition, a person died lying on the ice in a park in Vladivostok, and local authorities have since confirmed that the man is 60 years old.

Since Thursday, a state of emergency has been imposed across the region and makeshift shelters have been established that provide food, warmth and psychological support to those who cannot stay at home, while the authorities warn that conditions may continue to deteriorate in the long term, and scientists also warn that the weather The extremes could become more prevalent as a side effect of climate change