Weather around the world | The coldest storm in years .. 73% of the United States is covered with snow 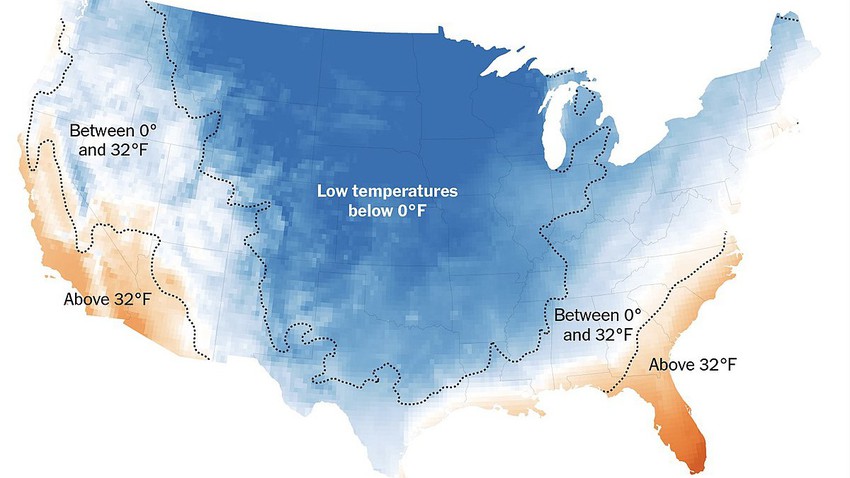 Weather of Arabia - Muhammad Aouina - The United States was affected by winter storms, which are the coldest in years , represented by the sweep of a snowstorm from coast to coast, which led to the prevalence of freezing weather and record temperatures were recorded in some states, which resulted in dangerous conditions in most parts of the country due to Not only that, but the initial economic losses were estimated at 60 billion dollars, heavy snow, ice formation and extremely low temperatures .

Weather conditions associated with the storm

On Saturday 12/13/2021, the United States was affected by the winter storm, which was later called by the media by the storm Uri, which had a widespread impact throughout the United States, northern Mexico and parts of Canada, and perhaps the most prominent weather phenomena associated with the storm is snowfall Covering 73.2% of the United States, it is the highest snow cover since 2003, according to NOAA.

The storm was also accompanied by icy and frigid weather and temperatures below zero degrees Celsius in most parts of the United States for an entire week.

For interested and professional ... Stratospheric warming and its impact

The consequences of stratospheric warming and its impact on the surface layers in important areas of the polar dome (Polar Vortex), leads to a more rippled jet stream, with waves moving more slowly around the world. When this happens, the arctic air flows, and the cold basins become Scattered in pockets where two or more masses of the polar dome migrate, and this translates into a negative form of the pole oscillations coefficient (AO) and thus a control of successive polar surges towards North America.