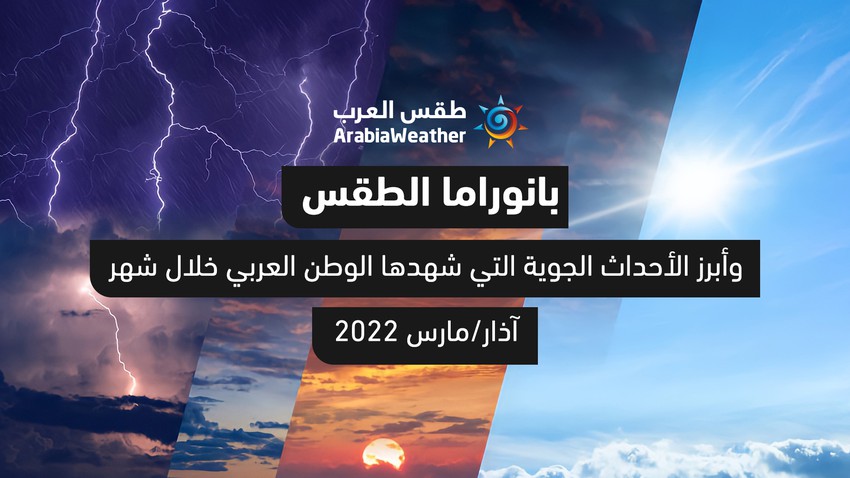 Weather of Arabia - During the month of last March, the Arab world witnessed many weather events, some of which hindered normal life in some areas, others brought good, and other events passed peacefully but left a special impact on the memory, and below we review the most prominent events that occurred in the homeland Al-Arabi during the month of March of 2022:

1. On Thursday 3-3-2022: an air depression accompanied by a cold air mass that affected the Levant, and was classified as a second degree in Jordan, bringing the cold weather to very cold and rain showers fell on various regions of the Levant, especially Jordan and Palestine, and snow fell Over the towering mountains of Syria and Lebanon, and the depression was accompanied by strong winds that touched the speed of their gusts of 100 km / h and worked to form dense dust waves in large areas of desert areas, including southern and eastern Jordan

2. From Thursday 10-3-2022 until Saturday 12-3-2022: an air depression and a very cold air mass affected the Levant, bringing stormy and rainy weather to a number of regions, and the depression was classified as a second-degree air in Jordan, and precipitation was concentrated in the regions The coastal areas of Syria, Lebanon, and the northern, central and central regions of the Kingdom and Palestine. The rain was accompanied by showers of hail, and snow showers fell over the high mountainous heights of the Levant, coinciding with strong southwesterly to westerly winds whose speed exceeded 100 km, and temperatures decreased after the departure of Atmospheric depression of zero centigrade in many areas and a strong wave of frost occurred, which engulfed agricultural areas.

3. Tuesday 15-3-2022 - and Wednesday 16-3-2022: a polar air mass of very cold origin coincided with humid northwestern air currents, where very cold weather prevailed, and the maximum temperatures did not exceed 5 degrees Celsius in the Jordanian capital, Amman, and it was higher than that Slightly in the rest of the capitals of the Levant, and showers of rain and cold fell on different areas, which were in the form of snow over the mountainous heights, including the eastern highlands of Jordan. In most areas, zero temperatures continued at night for a number of nights.

4. From Wednesday 23-3-2022 - Friday 25-3-2022: an air depression and a very cold and polar air mass that is unusual for its rush to the Levant at this time of the year, and the depression was classified as a third-degree air in Jordan, bringing very cold weather Rain and hail fell, sometimes heavy rains in a number of regions of the Levant, and snow showers fell over the northern, central and southern high mountainous heights, which accumulated to a limited extent in Jordan, in addition to snow showers falling over the heights of Palestine, and the snow was accumulating in the heights of Lebanon and Syria.

Watch the video: Scenes of rare snow in Jordan at the beginning of spring - Thursday 3/24-2022

2. Tuesday 8-3-2022: A new pentagonal depression caused a rise in temperatures, active winds and some rainfall in coastal areas.

3. Thursday 3-10-2022: An extension of an air depression and a cold air mass caused a significant decrease in temperatures and the prevalence of cold weather, and showers of rain fell on the northern coasts, coinciding with the activity of winds that raise dust and dust.

4. Monday and Tuesday 14-3-15-2022: a cold air mass brought temperatures down, and showers of rain fell on some coastal areas, coinciding with the activity of surface winds that raise dust and dust.

5. From Monday 3/21/2022 - Wednesday 3/23/2022: An extension of an air depression and a cold air mass, which brought a significant drop in temperatures, and showers of rain and hail fell on many parts of the northern coasts, accompanied by activity on wind speed.

1. Thursday and Friday 3/4/2022: A cold air front created unstable weather conditions accompanied by thunderstorms that were heavy in some areas, and sandstorms were active in most areas.

2. Friday and Saturday 11.12-3-2022: a cold air mass to a very cold air accompanied by a sharp drop in temperatures and cold weather in many areas during the day, but it is very cold at night and it was below zero degrees Celsius in the north and west of Iraq, with showers falling from Rain and snow in the northernmost regions.

3. Tuesday and Wednesday 3-15-16-2022: a very cold air mass accompanied by a sharp drop in temperatures and cold weather in many areas during the day, but it is very cold at night and the minimum temperature did not exceed 5 degrees Celsius in the capital, Baghdad, while it was below zero Centennial in the north and west of Iraq, with showers of rain and snow falling on the far northern regions.

4. From Sunday 20-3-2022 - Tuesday 22-3-2022: the emergence of a state of atmospheric instability accompanied by thunderstorms of rain in random geographical ranges, which were in the form of intermittent snow over the northern regions and parts of the western regions.

5. Wednesday 23/3-2022: a cold air mass over the north and west of Iraq was accompanied by a sharp drop in temperatures and the activity of dusty and dusty winds, and showers of rain and snow fell on the far northern regions

1. Thursday 3-3-2022: a cold air front created a state of atmospheric instability accompanied by rainfall of varying intensity and accompanied by the occurrence of thunderstorms.

2. Friday 4-3-2022: A strong sand storm that moved from Iraq towards Kuwait and eastern Saudi Arabia to Qatar and Bahrain caused a sharp decrease in the range of horizontal visibility and reached the point of non-existence in some cases.

3. Wednesday 16-3-2022: A cold air mass to the north and center of Saudi Arabia caused a significant decrease in temperatures and the activity of the northwest winds, which led to a high concentration of dust and the formation of dust waves in the eastern, central and southern regions, and the cold air mass worked to create a situation Limited atmospheric instability in northeastern and eastern Saudi Arabia led to showers of rain.

4. Wednesday 3/16/2022: A limited case of atmospheric instability over Kuwait resulted in local showers of rain, especially in the southern parts.

5. Sunday 20-3-2022: A state of atmospheric instability brought random thunderstorms of rain to central and western Saudi Arabia and extended to include Hail and Al-Qassim.

6. From Monday 3/21/2022 - Thursday 3/24/2022: a cold air mass to the north of Saudi Arabia brought a drop in temperatures, and cold to very cold weather prevailed, especially during the night hours, coinciding with the activity of surface winds that raise dust and dust.

1. From Thursday 3/3-2022 - Saturday 3/3-2022: an air depression affected the countries of the Maghreb, starting from Morocco to Algeria, Tunisia and western Libya, accompanied by a decrease in temperatures and precipitation, especially in the northern parts, with activity on wind speed.

2. From Saturday 3/12-2022 - Thursday 3/17-2022: an air depression over the Maghreb caused strong winds that caused the formation of huge sandstorms over Algeria and the desert areas, and rain fell on northern Morocco and later spread to Algeria and parts of Tunisia were It rains sometimes and temperatures drop significantly.

3. From Sunday 20-3-2022 - Tuesday 22-3-2022: a polar air mass of very cold origin over Libya caused a sharp drop in temperatures and the rule of cold weather during the day and very cold at night, and rain fell on the northern regions, and snow fell and accumulated in a way Rare over the northern mountainous heights, coinciding with the blowing of active winds that raise dust and dust.

4. From Monday 28-3-2022 - Wednesday 30-3-2022: a state of atmospheric instability in the countries of the Arab Maghreb caused rainfall with varying intensity, especially in Algeria and Morocco.