Weather study: Several reasons made the rainy season weak in the Arabian Peninsula 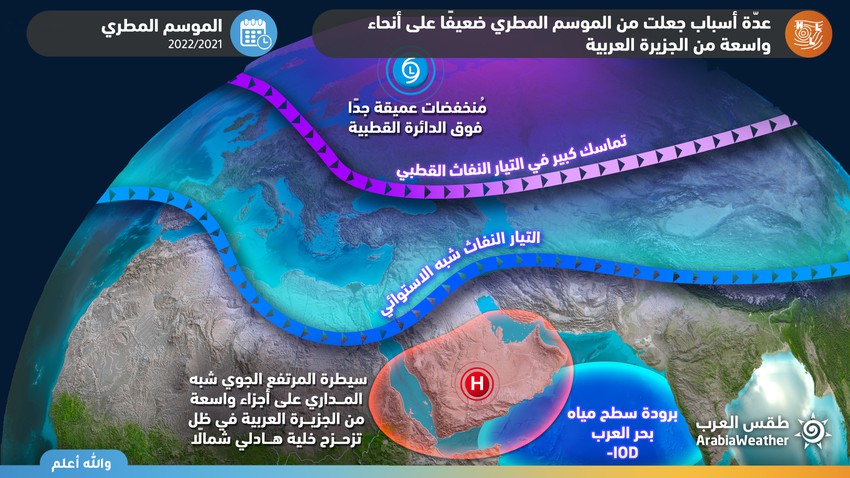 The weather of Arabia - the Arabian Peninsula and Saudi Arabia in particular were - and still are - affected by a weak rainy season, and far from any strong or comprehensive rain wave, as this period is characterized by its rain and the succession of its bounties, while the rains were limited to a few occasions on random parts of the Kingdom and sharply Medium.

This report sheds light on the scientific analysis and explanation of weather maps in an exclusive study that explains the most important reasons that made the rainy season 2021/2022 weak on the Arabian Peninsula.

Behavior of atmospheric systems in the upper atmosphere

Every winter, strong westerly winds revolve high in the stratosphere over the North Pole, revolving around cold air in a region of low atmospheric pressure, and this is called the stratospheric polar vortex, and despite its presence at high altitudes, its effect reaches heights close to The Earth's surface, especially in those layers that control the weather and shape weather patterns. In light of the great cooling that occurred in those layers located up to 30 km above the Earth’s surface, which reached low and record temperatures in one of the February periods, in addition to the intensity of occasional winds, all of this is reflected on the layers near the surface of the Earth and the decrease in atmospheric pressure in the Arctic Circle ( Polar Low) extending from high latitudes between 60 and 90 N.

The cohesion of the polar air in the upper regions of the North of the globe, or what is known as the cohesion of the polar cell and calmness in the movement of the polar jet streams, affects the weather in the sub-tropical regions surrounding the Mediterranean basin, (which is at the end of The torque of the cold basins), and is strongly affected by the yield of the polar cell in the north and the activity of the middle width cell (Ferrell cell). This is because the cold polar air is trapped in high latitudes in the north, away from the Mediterranean basin, and thus there is no strong refraction in the polar jet streams towards subtropical regions (Mediterranean Basin). 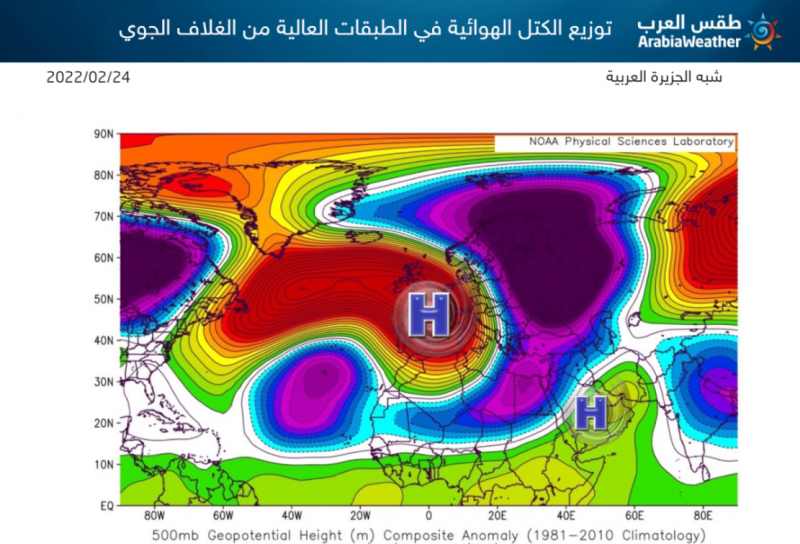 The attached aerial map shows the concentration of upper activity between the eastern and central Mediterranean, i.e. between Egypt and Libya, while most regions of the Arabian Peninsula remained under the shadows of the semi-tropical atmospheric height, which has a pivotal role in repelling the wet waves, whether from the south coming from the Arabian Sea or From the north coming from the Mediterranean and the Levant, which brings general stability to the atmosphere and the control of cold weather. With the continued stability of the distribution of air masses and atmospheric systems from the Atlantic Ocean, the North Pole, and the European continent, this led to the maintenance of the subtropical atmospheric height fixed for most of the periods.

How can water bodies contribute to the crystallization of atmospheric systems?

Perhaps most of the climatic phenomena that affect global weather are caused by the bilateral relationship between the oceans and the atmosphere, and one of the most difficult challenges in the process of weather forecasting is understanding the details of the interaction between them, which is still not fully understood and the code for this interaction has not been resolved. When mentioning the oceans, we must mention the largest oceans in the world, the area of the “Pacific Ocean” and the equatorial region of it, in which it is believed that the water temperature plays a prominent role in controlling the atmosphere (directly and indirectly), especially in the northern half of the Earth.

And many scientific studies that show the effect of the so-called La Nina phenomenon (a decrease in surface water temperatures in the tropical region of the Pacific Ocean from their general averages by more than 0.5 ° C and over a period of time exceeding 3 consecutive months) on the circulation of the Hadley cell (a rotational climatic cell). , the hot tropical air moves towards the Tropics of Cancer and Capricorn to descend towards the surface of the Earth and returns again to the equator), and the subtropical jet stream is formed as a result of the confluence of the upper winds from the Hadley cycle with the Ferrel cycle, which means that the La Niña phenomenon may indirectly affect the jet stream Subtropical and atmospheric highlands that arise at latitudes close to 30 degrees north, such as the subtropical high. 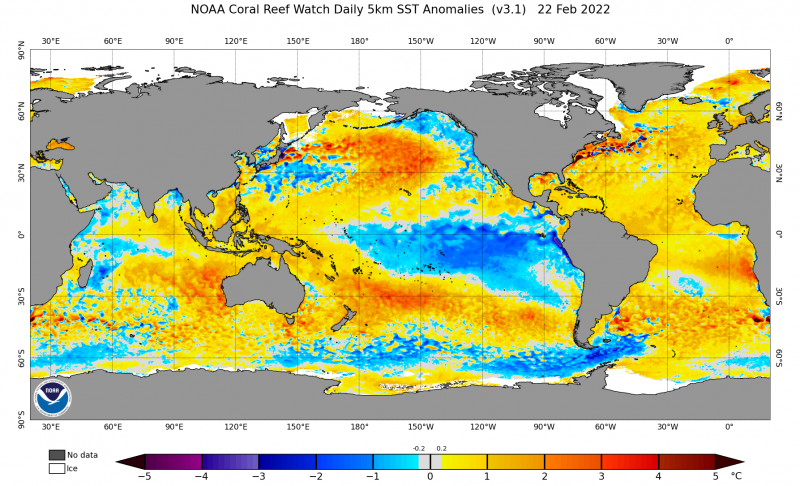 Both the atmosphere and the oceans follow natural cycles that extend between 5 to 30 years, sorting out specific weather patterns in the northern half of the world. The globe is also witnessing the phenomenon of global warming, where, since the beginning of the industrial revolution, since the beginning of the industrial revolution from 1840 to the present day, the world has been witnessing an increase in the emission of greenhouse gases, which choose the heat inside and re-radiate it back towards the earth, which led to a rise in the earth’s temperature between 1-2 degrees percentage, so what does that mean?

Arab weather clarifies, and despite the existence of global warming for many years, the weather phenomena that nature controls by the temperature of the ocean surface and the distribution of air masses around us are what led to the weakness of the rainy season on the Arabian Peninsula, while global warming has affected the increase and increase in the amount of extremism Weather conditions after God's will. Referring to the archival data, we find that the weakness of the rainy season in which we live is neither historical nor unprecedented. On the contrary, it happened in the past and will happen, God willing, over and over again in the future without stopping.