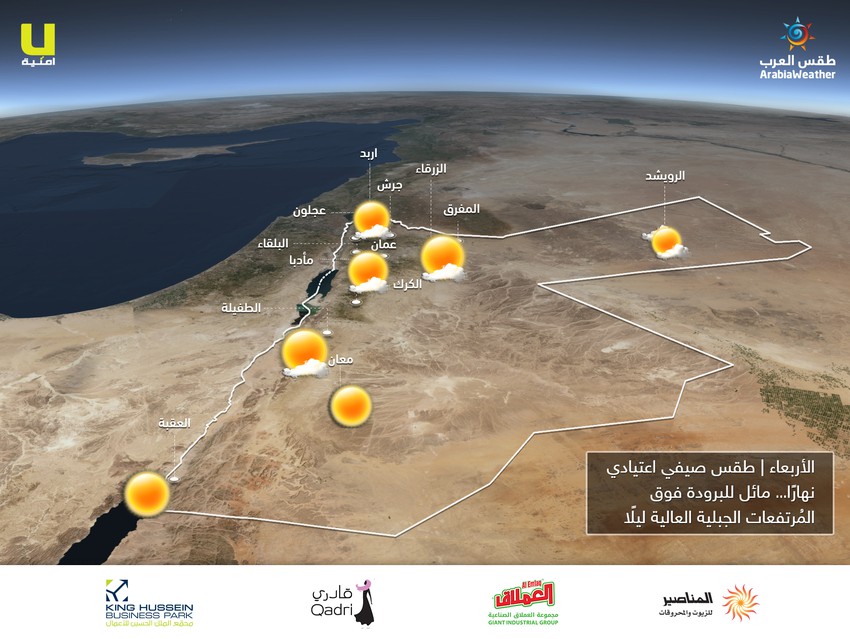 Weather of the Arabs - It is expected that a regular summer weather will prevail in various regions of the Kingdom on Wednesday, while it will continue to be relatively hot in the Jordan Valley, Bahralmite, Aqaba and eastern Badia regions, with temperatures remaining around their rates for this time of the year .

Some intermittent clouds also appear from the afternoon hours, especially in the eastern regions of the Kingdom .

Rabah is active with occasional strong gifts in the Eastern Badia

It is expected that the wind will be active with the afternoon hours, accompanied by strong donations, sometimes in the eastern Badia, and it may be dust in parts of these areas, which may be heavy especially on the Jordanian-Saudi border .

Therefore, the ritual of the Arabs recommends the need to pay attention to the occasional heavy dust, with afternoon and evening hours in Safawi, Azraq, and the border crossing with Saudi Arabia, "Al-Omari ".

With night hours, temperatures drop a little and the weather is nice in most regions, and it tends to cool over high mountainous hills with some moderate clouds appearing in some areas, with wind activity over some heights and in desert areas .