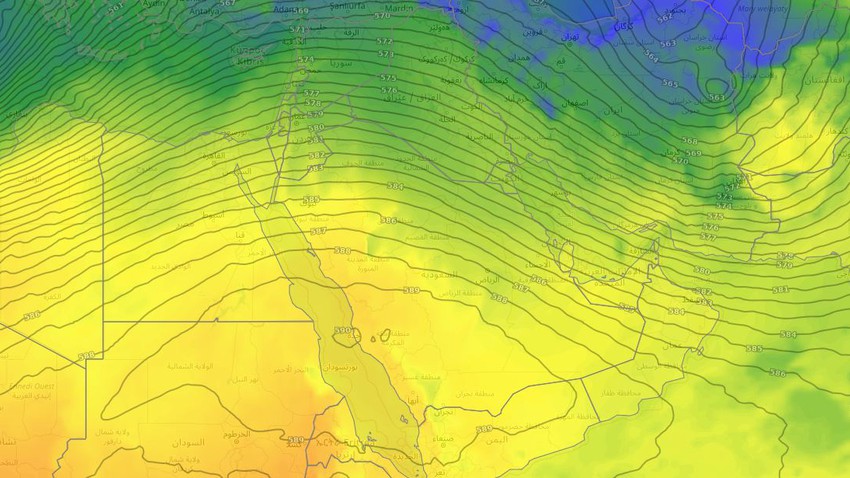 Arab weather - It is expected that the air systems in the Arabian Peninsula will witness a remarkable change during the weekend, so that the state of air instability affecting parts of the Sultanate of Oman and the Emirates will end, on the other hand, the impact of a relatively cold air mass will deepen over large parts of the Arabian Peninsula, and the details are as follows. :

The coldest since the start of the season

In the details, it is expected that the northern and central parts of the Kingdom will be affected by a relatively cold air mass coming from the eastern basin of the Mediterranean and the Levant region, accompanied by a sharp and significant drop in temperatures on Thursday in Al-Jawf - Tabuk - the northern border - Hail - Qassim - Hafr Al-Batin. ", to go deeper on Friday to directly affect Sharqia and Riyadh. 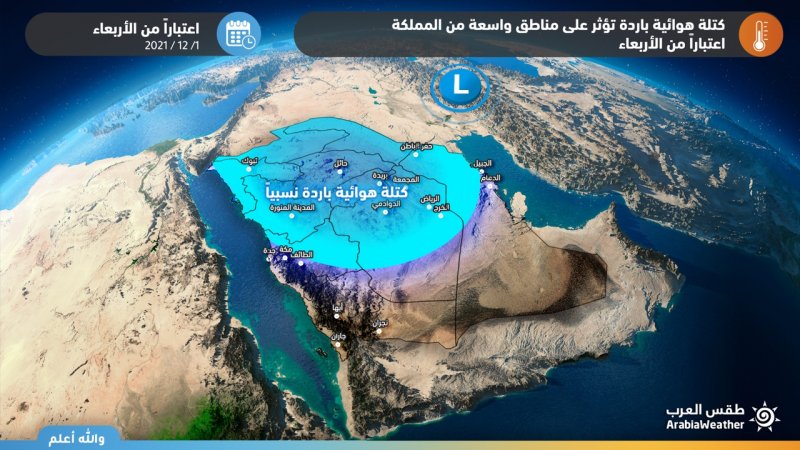 It is expected that the minimum temperatures will drop to less than 5 degrees Celsius in several parts of Al-Jawf, Tabuk, the northern borders and Hail, to have a favorable opportunity for frost formation during the early morning hours of Friday and Saturday in those areas.

Click here to know more details of the weather in Saudi Arabia on Thursday.

Active winds gusting speed and turbulence in the Gulf

Gradual decrease in temperatures in Kuwait

Kuwait is affected by an extension of a shallow air rise, with temperatures gradually decreasing over the next few days, reaching the peak of the decline on Friday and Saturday so that the temperatures are in the early twenties Celsius, and pleasant weather prevails in general during daylight hours, as active northwest winds blow, raising the speed Dust levels in the atmosphere.

Click here to know more details about the weather in Saudi Arabia on Thursday.

Remarkable activity on wind speed and turbulence in the Gulf

Significant drop in temperatures in Qatar and Bahrain

Temperatures are expected to rise slightly on Thursday in Qatar and Bahrain, and as of Friday, humid and brisk northwesterly winds will blow on both Qatar and Bahrain. 50 km/h, which would lead to high levels of dust in the atmosphere, and turbulence in the Arabian Gulf.

Arab weather warns of thermal fluctuations and low temperatures, in addition to wind activity and the accompanying high concentration of dust in the atmosphere and low horizontal visibility at times, in addition to the possibility of high waves in the Arabian Gulf. Regarding the details, the effect of the depression is moving eastward, completely away from the atmosphere of the Sultanate and the Emirates, so that the weather tends to be stable in most areas, and it is expected, God willing, that the subtropical air altitude will budge to dominate the entire atmosphere of the Sultanate of Oman and the Emirates during the next few days, ensuring the rule of a stable atmosphere. In all regions, temperatures tend to rise slightly over the next two days.

UAE: Find out the most prominent details of the expected weather in the country in the coming days

Sultanate of Oman: The air groove is moving east and away from the Sultanate’s airspace

Weather and temperatures in the Gulf capitals on Friday 12/3/2021:

important | Oman Meteorology issues alert No. 1 about active winds, possible dust and sea turbulence at the end of the week