Weekly Bulletin | How will the weather be in the first week of August and the rest of the month? 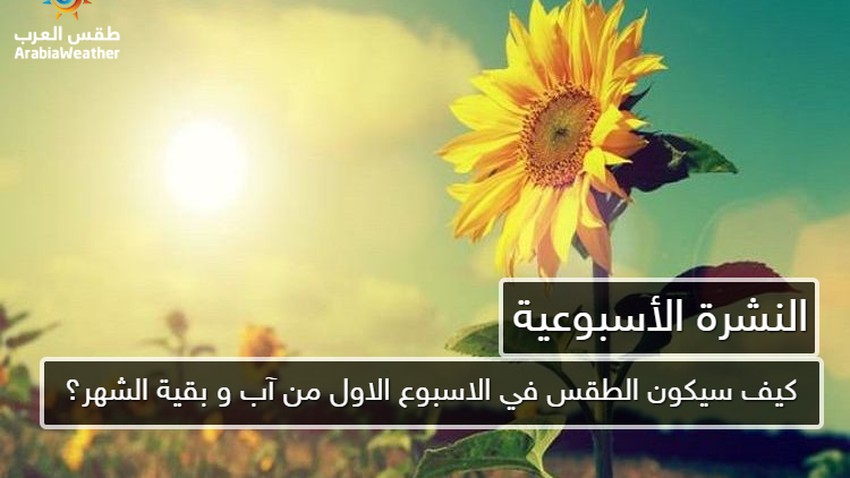 Arab Weather - After the dramatically high temperatures during the last week of July 2020, the effects of the onerous heat wave, which has extended since the twenty-sixth of July and for several consecutive days, end, as temperatures drop during the first week of August.

In the details , the usual summer weather during the day and moderate to pleasant at night during the first week of August in many areas with the appearance of low clouds in some areas.

This is due to the rush of rainy Atlantic depressions towards the British Isles, which leads to an increase in air pressure in large areas of northwestern Africa, the central Mediterranean, southern, central and northern European continents, in conjunction with a moderation of moderate and hot air masses from the central and eastern European continent towards Turkey and the eastern basin. For the Mediterranean.

From Sunday to Monday ... a slight decrease in temperature

Temperatures tend to decrease a little from Sunday to Monday, to become close to the usual rates to slightly higher, and the weather is normal summer over mountainous hills, and relatively hot in the rest of the regions, including the interior, the Jordan Valley, the Bahralmite, Aqaba and the Badia .

There will be an additional decrease in temperatures on Tuesday and Wednesday, to reach below their general rates of 2-3 degrees Celsius, where the weather will be mild over the mountains and normal in the rest of the regions .

In the eastern Badia, the northwest wind with moderate winds is active and dust-free. So

The return of nice nights in all regions of the Kingdom

With the hours of the night, the weather is generally pleasant, with low clouds appearing, and the winds are northwesterly moderate, sometimes active.

More details about the weather conditions and temperatures for the month of August until its end, by subscribing and viewing the monthly newsletter available through the Arab Weather app in its new version