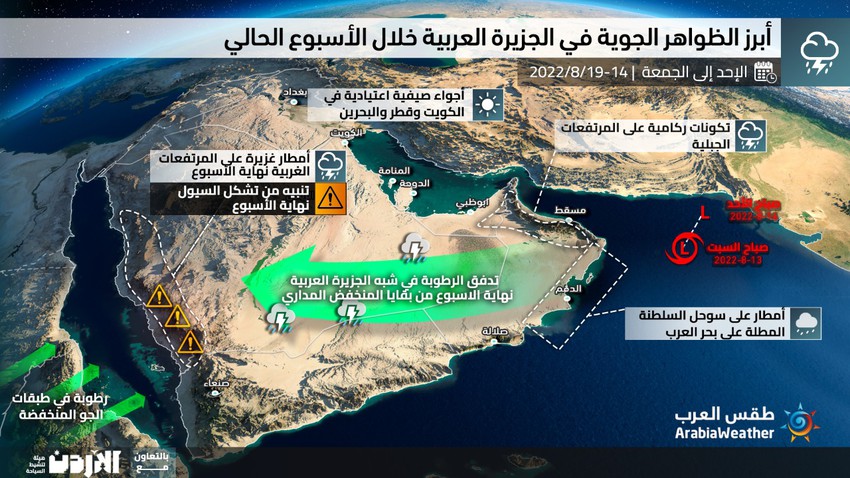 Specialists in the "Arab Weather" Center said that the unstable weather conditions that cause this rainy state called (tropic 22) are expected to continue in the Kingdom in the coming days, so that rain opportunities remain in separate parts of Najran, the Empty Quarter, and southwest of the Riyadh region administratively with Cumulonimbus formations form during the noon and evening period on parts of the southwestern and western highlands of the Kingdom represented by Jazan, Asir, Al Baha, Makkah Al-Mukarramah, Al-Madinah Al-Munawwarah and southern Tabuk.

It is expected that the weather disturbances will intensify in the western sector of the Kingdom during the end of the week, as the rains will expand and intensify to include large parts of the south and west of the Kingdom, as a result of the influx of tropical moisture resulting from the remnants of the tropical depression.. More details .

The latest information and data received indicate that the tropical situation, which is classified as a deep tropical depression (at the moment of preparing the report), is located to the north of the Arabian Sea, and the surface wind speed around the center is estimated at about 27-33 knots, and it is expected that the tropical situation will move during the next 24 hours towards the coasts Pakistani.

Regarding its effects on the atmosphere of the Sultanate of Oman, numerical forecasts indicate the possibility of some rainy clouds flowing over the next few days to the coasts of South Al Sharqiah and Al Wusta, accompanied by rainfall of varying intensity in some areas, with an opportunity for some rainy clouds to extend to parts of the governorates of North Al Sharqiah, Muscat, Al Dakhiliyah and Dhofar with scattered showers. from rain. 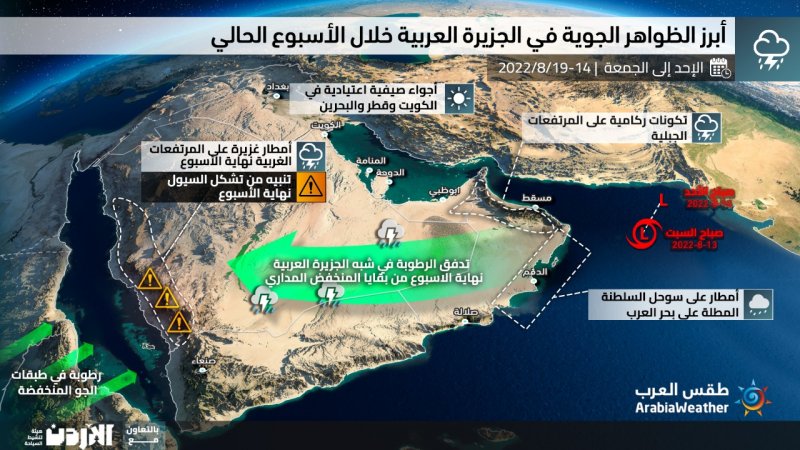 Normal summer weather in Kuwait, Qatar and Bahrain, and chances of rain in the Emirates

Regarding the weather in the UAE, the National Center of Meteorology said that the weather will be cloudy to partly cloudy in the coming days, with the possibility of convective clouds over some eastern and southern regions in the afternoon, accompanied by rain, with expectations of a decrease in temperature levels as of Tuesday.