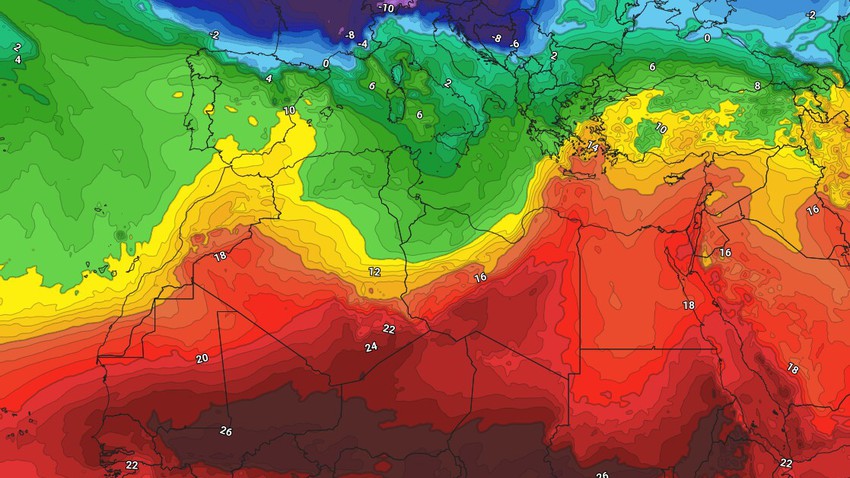 Weather of Arabia - Mohamed Aouina - The latest output of numerical models in "Arab Weather" indicates that parts of the Maghreb are affected by unstable weather conditions, resulting from the deepening of a seasonal desert air depression over the Algerian desert, working on the growth and multiplication of cumulonimbus thunderstorms in some regions.

An atmospheric depression is forming in the Algerian desert, with which the eastern winds blow from the Mediterranean, so that the temperatures are around their averages for this time of the year in Tunisia, northern Algeria and Morocco, while the temperature is warm in the southern part.

A hot air mass is pouring out from the Libyan desert, where it is expected that winds will blow over all regions of Libya, warm and dusty southwesterly, on Sunday and Monday, while it will decrease in the second half of the week.

Thunderstorms in parts of the Arab Maghreb countries

It is expected that many regions of Tunisia, coastal areas and close to the coasts of Algeria, starting with hours on Sunday evening, and on Monday, will witness showers of rain accompanied by thunder in some areas, while the atmosphere will completely stabilize on Tuesday.

Parts of the north of the Kingdom of Morocco will be affected on Wednesday and Thursday by a state of atmospheric instability caused by the influx of quantities of moisture in the various layers of the atmosphere, which creates strong thunder clouds locally.