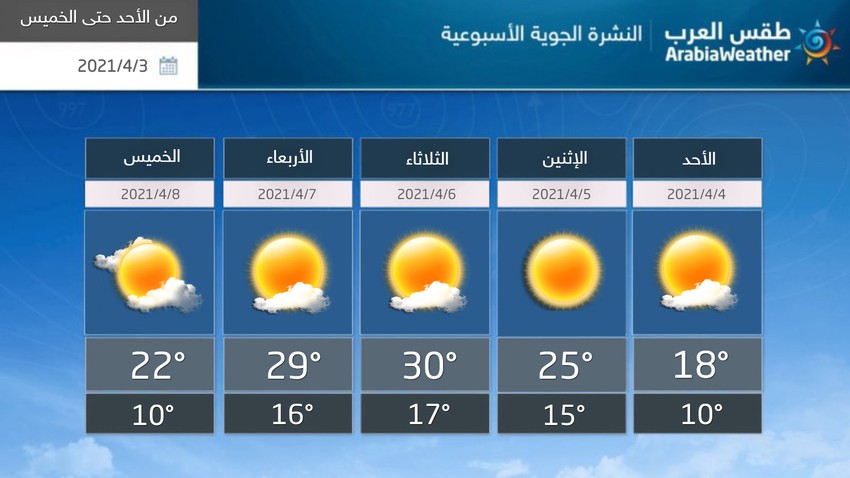 Arab Weather - Muhammad Awina - Palestine witnesses during the beginning of this week a moderate spring weather in all governorates and regions of Palestine, so that the temperatures are around their average for such time of the year.

Temperatures soar on Monday; As a result, Palestine and the rest of the Levant are affected by a relatively hot air mass , thus being higher than their averages for this time of the year by about 3-5 degrees Celsius, so that warm climates prevail in various regions, and the winds will be from east to southeasterly with light speed.

The region is affected by the extension of the Red Sea Depression so that the effect of the relatively warm air mass associated with it reaches its climax, so that there is a further rise in temperatures and becomes higher than the general rates for this time of year around 8-10 degrees Celsius, and relatively hot weather prevails in the mountains and hot in the rest Areas , and quantities of medium and high clouds appear with the afternoon and afternoon hours, and the winds will be light to moderate easterly.

The effect of the relatively warm air mass subsided on Thursday

It is expected that the effect of the relatively warm air mass will diminish, so that there will be a significant decrease in the temperatures on Thursday, while remaining above their general levels, and the spring weather will be warm over the mountain heights, and relatively hot in the rest of the regions.

With the hours of the night, it is expected that the temperatures will witness a significant decrease compared to the previous nights, as the weather turns to be cold in all regions, and the humidity levels in the atmosphere will increase with the appearance of clouds at different heights.