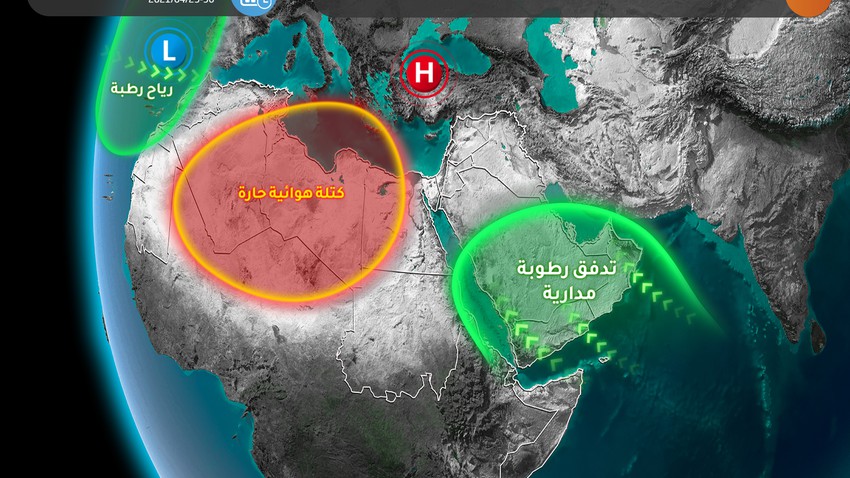 Arab Weather - After the great rise in temperatures that the Levant region and Egypt witnessed during the weekend, these temperatures are expected to decrease to return to their levels, and it is expected that a humid air mass will rush towards the Arabian Peninsula working to improve the chances of rain in the remainder of Libya, Tunisia and parts From Algeria under the influence of warm air currents, unlike Morocco, which will be exposed to wet currents from the Atlantic Ocean.

Amounts of moisture flow from the Atlantic Ocean towards the Kingdom of Morocco as a result of the concentration of an air depression to the west of the country, where the opportunity is ripe for showers of rain on more than one occasion this week in the north and center of the country

Egypt and the Levant

Temperatures return to decline to become around their averages for such a time of the year during the beginning and middle of the week in Egypt, Palestine, Jordan, Lebanon and Syria due to the blowing of winds coming from the Mediterranean Sea working to soften the atmosphere.

However, temperatures will rise again at the end of the week and are above their averages for this time of year.

Iraq and the Arabian Peninsula

The weather continues to be hot in Iraq with activity in the speedy northwest winds, causing dust and dust on a daily basis in separate areas.

Unsteady weather conditions prevail on Sunday in many regions of Saudi Arabia, and thunderstorms will rain in the north, west and southwest of the Kingdom

However, as of the middle of the week, a humid air mass is pushing towards the south of the Arabian Peninsula coming from the Arabian Sea, where unstable weather conditions arise in Yemen, the Sultanate of Oman, the Emirates and Saudi Arabia, while Kuwait, Bahrain and Qatar remain in hot and stable conditions.