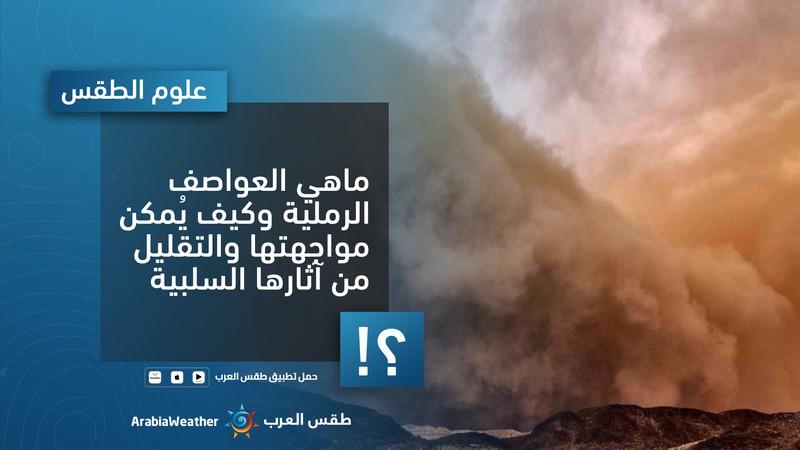 Weather of Arabia - Sandstorms are one of the weather phenomena that negatively affect various aspects of public life. Climate changes have recently contributed to changing weather patterns in the form of fluctuation and lack of rain, which led to an increase in drought rates, which contributed to raising the rate of sand storms than usual in areas From the world in general and the Arab world in particular, what is this weather phenomenon, how does it form, and can it be confronted through the following report?

What are sand storms?

It is a concept called the phenomenon of the rise of a large amount of dust in a specific geographical area due to the great influence of the force of the wind, and its height can reach very high levels that may reach about 5-6 kilometers , in addition to sandstorms covering geographical areas extending for hundreds of kilometers.

Sandstorms abound in desert and arid areas with few vegetation cover, which makes the soil loose and winds capable of carrying them. Perhaps the most prominent regions of the world active in sandstorms are the Great African Desert, where the African desert is the largest source of dust globally, followed by the Badia of western Iraq, the Syrian Badia and northern Saudi Arabia.

What are the causes of sandstorms?

The occurrence of sandstorms is not monopolized by a certain season of the year, sandstorms can occur in summer and winter, and perhaps the most prominent causes of sandstorms are:

What are the damages of sandstorms?

Sandstorms affect various aspects of public life. Sand storms first affect human health and make many people annually vulnerable to suffocation and later death, and may cause countries to incur hundreds of thousands of dollars in losses by disrupting air, land and sometimes sea navigation, in addition to its negative effects. On plants, especially those that are in the process of growth.

Sandstorms move between countries, but they cannot be stopped!

Sand storms are sometimes transcontinental weather phenomena, and they can affect regionally many countries, one country after another, but they can only be stopped in the absence of the cause of their occurrence. The air until the wind direction changes and the wind carries it away or through rain, then the dust effect ends completely.

But despite our inability to prevent sandstorms from coming to us from other countries, we can confront these weather systems and prevent them from happening locally or reduce their intensity by exploiting the lands by filling them with vegetation and afforestation, especially in the vicinity of cities and border areas.

How does Arab weather contribute to facing dust storms?

In light of international efforts to reduce the negative effects of weather extremes, including an increase in the incidence of sandstorms, experts of the Arab Regional Weather Forecast Center have developed an early warning system based on artificial intelligence concerned with dust storms or dust in general. The end of the dust waves and the expected horizontal visibility, in addition to providing exclusive computer maps to simulate the movement of dust and special recommendations for dealing with dust waves for each sector.

A stunning scene of a UFO-like cloud formed over Bursa, Turkey.. Video

Jordan | Tuesday, the first air depression classified in the second degree, after about a month of interruption, followed by the last Thursday