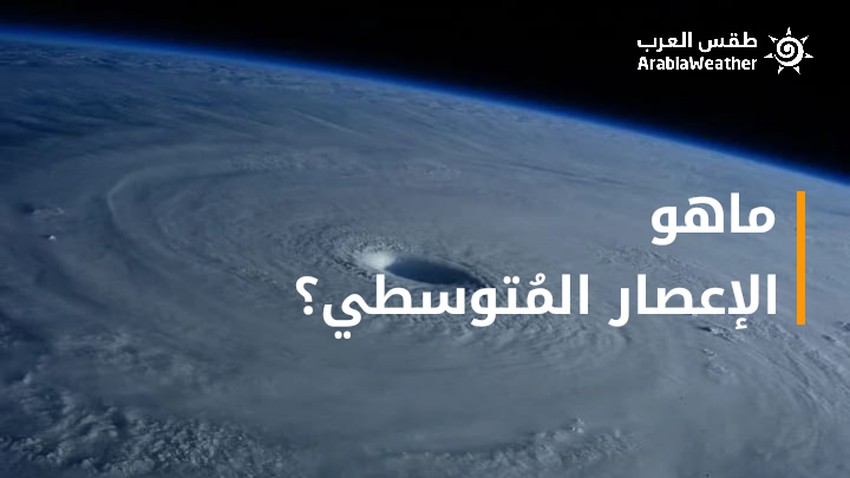 Weather of Arabia - Hurricanes are considered one of the most destructive weather phenomena on the planet, with their strong winds and heavy rain, and their mention is often accompanied by words such as “victims” or “material losses”, and some may be surprised, that the Mediterranean Sea in particular, witnesses in some years, They form subtropical weather conditions, similar in their characteristics and shape to hurricanes, so what are Mediterranean cyclones .

What are Mediterranean cyclones?

This weather phenomenon was identified and identified in the Mediterranean region in the eighties of the twentieth century, using the wide coverage of satellites, which showed low atmospheric pressures ( similar to tropical ) that caused the formation of a cyclone eye in the middle of it, and accordingly it turned out that this weather phenomenon is not rare. In particular, it has been repeated in previous years.

Storms rarely develop in the Mediterranean to hurricanes subtropical because of the relative sea water shallow, climate surrounding dry it, the Mediterranean sea is a body of water - surrounded almost entirely by land, where Europe is located in the north and Africa in the south, and connects to the Atlantic Ocean through the Strait of Mt. Tariq.

Tropical-like Mediterranean cyclones mostly form over the western and central Mediterranean, and these storms can form throughout the year, but they peak in the autumn season, specifically in October and November, and they have been likened to the tropics because they grow outside the tropics.

The most characteristic of Mediterranean cyclones is the eye of the hurricane, which is clearly visible in satellite images, and the heart of the storm is warm, and subtropical cyclones differ from tropical cyclones in that the wind speed and strength are less, and their diameter is less.

What are the negative effects of the Mediterranean hurricanes?

Mediterranean hurricanes can cause sudden floods and torrents, due to heavy rainfall, strong winds that disturb the sea and high waves, and their impact is not limited to material damage only. These hurricanes leave human victims. On November 18, 2017, a Mediterranean storm hit Greece, which was called The Meteorological Institute of the University of Berlin named 'Noma', causing flash floods, killing 20 people, and damaging more than 1,000 homes.

Perhaps the clearest example of this phenomenon is what happened in mid-January of 1995, when a hurricane formed in the middle of the Mediterranean, in the maritime region between Italy, Greece and Libya.

The story of this hurricane began on 1/1/1995, with the presence of an air turbulence in northern Libya, with the accompanying convection extending from Tunisia in the south to Greece and Albania in the north. To form an air depression quickly separated itself from the cold air mass in the north, to acquire tropical characteristics.

On January 15, 1995, one of the German ships passed near the depression, at which time the crew warned that the ship was subjected to strong winds of more than 140 kilometers per hour, and a low air pressure of 975 millibars, which is equivalent to the strength of the winds in a first-class hurricane. .

During the noon hours of that day, the center of the storm appeared in the form of a well-defined "eye", which confirmed that what had formed on that day was a hurricane in every sense of the word.

What are the conditions for such hurricanes?

The cold air masses coming from the north are the main factor in the formation of such weather systems, as this cold air meets when it meets the moist and warm air coming from the south to form the frontal depressions, in conjunction with the warmth of sea water to more than 20 degrees Celsius, in addition to The presence of very turbulent weather conditions.

If all the above weather conditions are present, the only remaining condition is the separation of the depression formed from the cold mass in the north, and its acquisition of sufficient tropical characteristics, and this does not happen except very rarely.