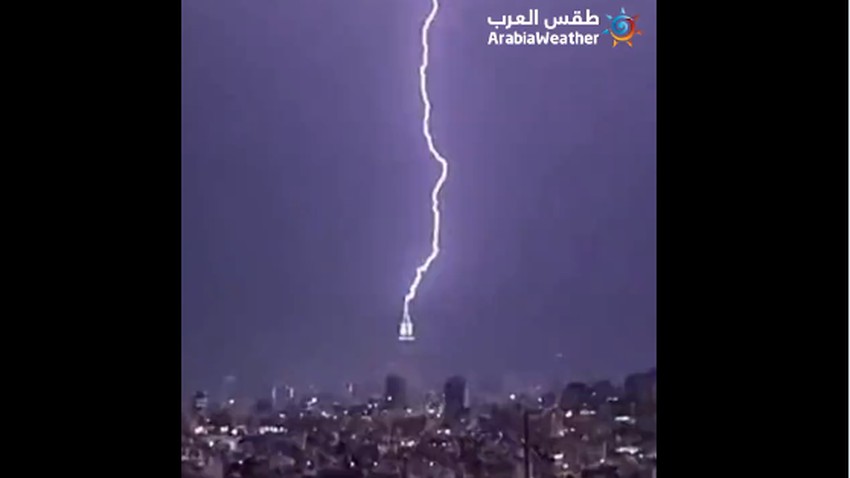 Arab Weather - An amazing luminous display of a rare phenomenon of lightning lit up the sky of the holy city of Makkah on Friday night (August 5), and the scene was documented in a video clip showing a bolt of lightning exploding from the clock tower towards the sky, unlike what we usually see in thunderstorms.

#makkah_now
Lightning lights up the sky of the campus
“It is He who shows you lightning for fear and greed, and raises the heavy clouds.” #Jeddah_alan # Friday night pic.twitter.com/rWDRqi6ljO

What is upward lightning (reverse lightning)?

Although the mechanism in which lightning occurs in its various types is still a science full of secrets, it is simply an electrical discharge due to the accumulation of electric charges in thunderstorms (cumulus clouds), and negative charges can occur (which often happens) or discharge of charges Positive (then the lightning is stronger and more dangerous).

Through studies conducted by scientists, it was found that upward lightning (or reverse lightning) occurs primarily when there is a positive lightning flash that transfers charges from the cloud to the ground, so the change in the electric field caused by the previous flash leads to an upward electric discharge from a tall object such as a building or Tower or wind turbines, and upward lightning does not occur if a tall object is not present, and these tall structures experience currents of upward lightning at a much higher rate than they would encounter from ordinary downward lightning.

This is another video showing footage of the spark of lightning rising from the connection towers in the holy city of Makkah:

Thunderstorms - how do they arise and what are their types?

The dangers of lightning strikes..and ways to protect them