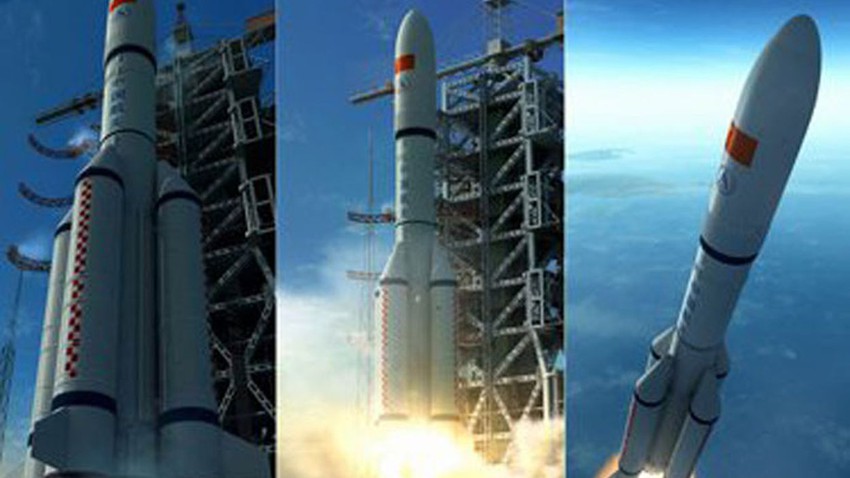 ArabiaWeather - On April 29, China launched a Long March 5B missile, carrying one of the parts of the space station that it intends to build, and it is the basic unit in the station, which will be the residence of the astronauts. After the missile reached the required location, the unit was separated to rotate in a fixed orbit around the Earth until the remaining parts were sent through 10 other flights to complete the space station by 2022. Let us follow the rocket’s story to learn first about the way the missiles work!

How do rockets work?

Some people may think that rockets launch depending on the thrust of the reverse air, but rockets do not depend on air thrust because they also operate in space where there is no air, but rockets benefit from the force of momentum, or the amount of force that a moving object possesses.

To zoom in, imagine yourself standing on a skateboard with a basketball in hand. If you throw the basketball in one direction, you and the skateboard will be pushed in the opposite direction to maintain the momentum, as the momentum of any system remains constant unless an external force affects it, so you will move backward in an instant. The faster you throw the ball with more force.

The rockets work by expelling the hot exhaust from the engine, which works on the same principle as a basketball, where the gas produced by combustion comes out of the engine nozzle very quickly, which gives the missile a lot of thrust. As a result, the missile was impulsively moving in the opposite direction to the exhaust exit.

Missiles release their exhaust by burning the fuel in the rocket engine. Unlike jet engines for aircraft, rockets are designed to operate in space: they do not have air intakes, and they carry their own oxidants, which are substances that play the role of oxygen in burning fuels. Rocket fuel and oxidizer - called propellants - can be solid or liquid. The Space Shuttle's side boosters use solid fuel, while many modern rockets use liquid fuel.

What are the stages of launching the missile?
Today's large space rockets consist of at least two stages, sections stacked in a common cylindrical shell. Each stage has its own engines, which can vary in number. SpaceX's Falcon 9 missile first stage has nine engines, while the first stage of the Antares Antares Northrop Grumman missile has two engines.

The rocket's first stage departs the rocket from the lower atmosphere, sometimes with the help of additional side boosters. Since the first stage must lift the entire missile, its payload (or payload), and any unused fuel, it is the largest and most powerful section.

The faster the missile moves, the greater the air resistance to it. But the higher the rocket, the thinner the atmosphere. Together, these two factors mean that the pressure on the missile rises and then decreases during launch, and peaks at a pressure known as max q. For SpaceX Falcon 9 and United Launch Alliance Atlas V, the maximum q occurs at 80 to 90 seconds after takeoff, at altitudes between seven and nine miles.

Historically, most of the discarded rocket parts were left to fall to the ground and burn in the atmosphere. But starting in the 1980s with the NASA Space Shuttle, engineers designed missile parts that could be recovered and reused. Private companies including SpaceX and Blue Origin are building first-stage rockets that return to Earth and land on their own. The more reusable missile parts, the cheaper missile launches can be obtained.

Why is NASA now deciding to return to the moon's surface?