What is the truth about the rainbow on Mars that appeared in a photograph taken by Perseverance? 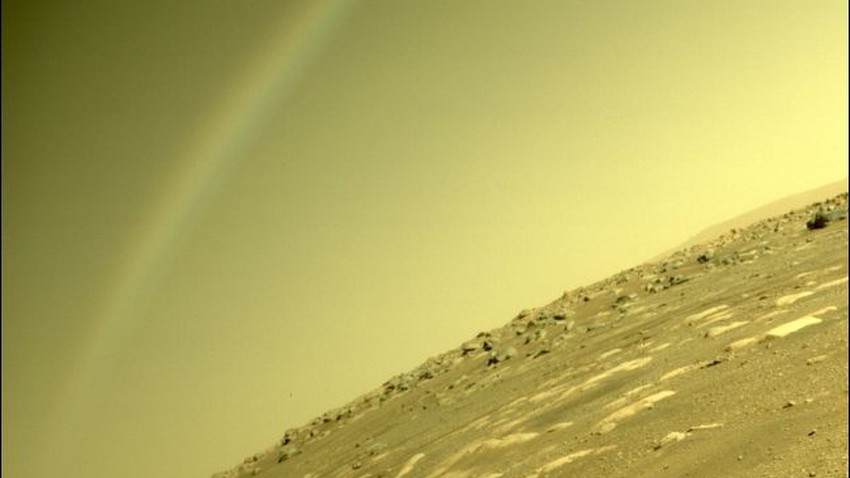 Arab Weather - picked up space Percyverns "Perseverance" vehicle NASA's image on Sunday (4 April) , it seems like a rainbow appear in the Martian sky, the image has spread rapidly through the exotic means of social communication, is it really a picture of the rainbow? Is it possible to form a rainbow in the sky of Mars?

Can a rainbow form on Mars?

What is the truth about the rainbow shown in the picture?

The bisiverance took the photo with the left rear camera, so what appeared to be a rainbow in the photo was caused by the effect of light scattering through the camera lens.

It is reported that Perseverance landed on the surface of Mars on February 18, 2021, and is currently of the historical event by launching a helicopter in the sky of Mars, which is designed to demonstrate that aerial exploration is possible on Mars , and the plane can begin its first flight on Sunday (11 April).

After that, Peacefulness will begin to focus on its scientific goals. The rover will search for signs of ancient life on Mars at one of the sites there, which are believed to have contained a lake and river delta billions of years ago.

Peacefulness will also collect and store dozens of samples for return to Earth, where they can be examined in more detail by scientists in well-equipped laboratories. A joint NASA / European Space Agency campaign will transport these Mars samples back to Earth, possibly as early as 2031.