What the rainy situation holds for the rest of this day, Thursday !! 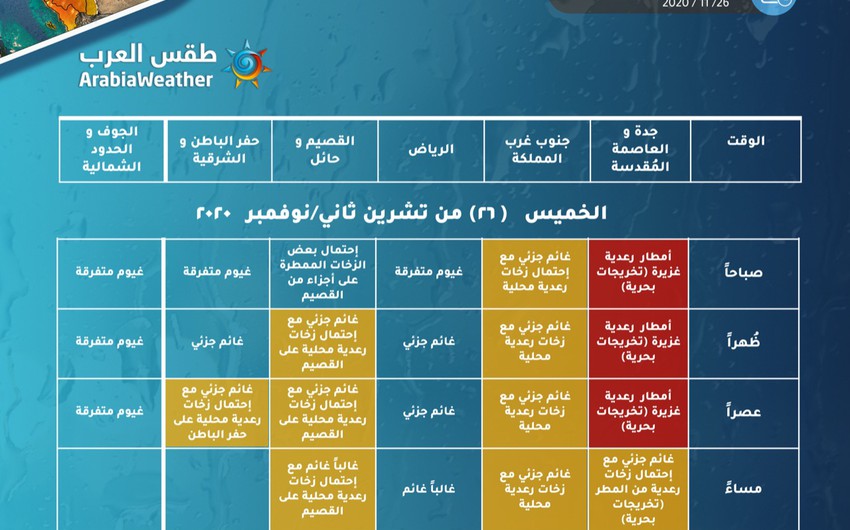 Weather Arabs - carried the weather first watering Mbhratha western regions of the kingdom with hours on Thursday morning, torrential showers thunderstorms in the coastal areas of Rabigh, Jeddah, Mecca and Taif extension to parts of the coast lion and Qunfudah and parts of Asir highlands and Baha thankfully, and formed some of the floods in particular In the north of the city of Jeddah, as well as parts of the vicinity of Makkah and Taif.

Weather forecasts during the coming hours for Thursday

The outputs of the special computer modeling indicate the continued flow of cold air currents associated with the upper basin in the north of the Kingdom towards the southern and central parts of the country, which is matched by the surge of warm and humid southern currents from the Arabian Sea , which means the formation of thunder clouds in the coasts of the southwestern and southern regions of the country, extending to the heights Asir, Abha, Al-Baha, and some heights of Jizan, and it is expected to extend with the evening and night hours towards parts of the western administrative region of Riyadh. The rain clouds also include parts of Qassim and the far east of Hail, extending to Hafar Al-Batin in the northeast of the country.

The nature of rain clouds is moderate to strong in the southwestern coast and highlands, while it is light to medium sometimes in the central parts and the northeastern regions of the country, and it is also associated with the activity of surface winds sometimes descending and stirring some dust locally in the forefront, and the opportunities for thunderstorms continue until night hours It is falling behind in the various aforementioned regions, while it is gradually retreating from the regions of Jeddah and Makkah.

It is expected that thunder clouds will be more abundant in the southwest of the country, leading to the formation of torrents and water pools and the activity of downward winds, as shown in the attached table, which shows the timeline of weather conditions in the various areas mentioned, God willing.