Why is the moon red during a total eclipse? 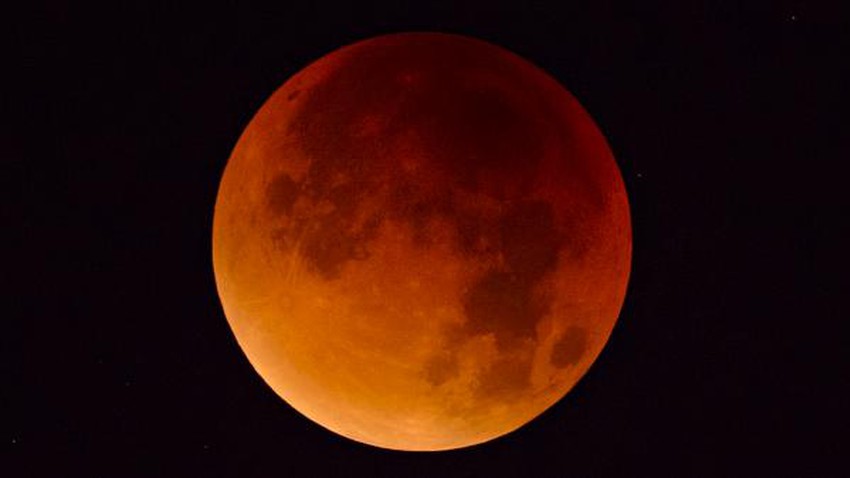 Arab weather - the moon is a dark planet that does not radiate light like stars, but we see it illuminating the earth’s sky because its surface reflects the sun’s light, and when the phenomenon of a total eclipse of the moon occurs, the planet is in a straight line between the sun and the moon, so the earth blocks the sun’s light from the moon, but during the occurrence of an eclipse Total Moon The surface of the moon glows reddish or orange rather than becoming completely dark. So why does this happen?

Why is the moon red?

The red color in which the moon appears during a total eclipse has prompted many people in recent years to refer to a total lunar eclipse as a " blood moon. " The reason why the moon has a reddish color during a total eclipse is a phenomenon called " Rayleigh scattering ," which is the same The mechanism responsible for causing the colors to appear in the sky at sunrise and sunset, and to make the sky appear blue.

We will explain this phenomenon gradually, beginning with the nature of sunlight, and how it interacts with the Earth's atmosphere.

Although sunlight may appear to the human eye as white, it is actually composed of different colors called the colors of the visible spectrum, these colors can be seen through a prism or rainbow, the visible spectrum consists of several colors each with a specific wavelength and frequency, Colors towards the red part of the spectrum have longer wavelengths and lower frequencies compared to colors in the purple part of the spectrum, which have shorter wavelengths and higher frequencies.

The next piece of the puzzle that causes the moon to turn red during a total eclipse is Earth's atmosphere . The layer of air surrounding our planet consists of various gases, water droplets and dust particles.

When sunlight entering Earth's atmosphere collides with particles smaller than the wavelengths of light, it scatters in different directions. However, not all colors in the light spectrum are scattered evenly. Colors with shorter wavelengths, especially violets and blue, are scattered more strongly, so they are removed from sunlight before they strike the moon's surface during a lunar eclipse. Those with longer wavelengths, such as red and orange, pass through the atmosphere. This orange-red light bends or refracts around the Earth, colliding with the surface of the moon and giving it the reddish-orange glow that is famous for its total lunar eclipse.

The Three Shades of Earth 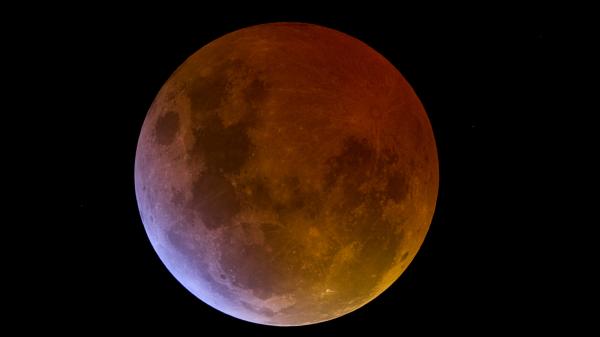 (A light blue stripe visible on the moon's surface)

Look for the blue light

Veteran eclipse watchers will tell you that if you look seriously at the beginning and before the end of college, you may spot a light blue or turquoise stripe on the face of the moon (see photo). This happens because Earth's ozone layer scatters red light and allows some of the blue light to pass through, which is otherwise filtered by other layers of the atmosphere.

The moon can have different shades of red, orange, or gold during a total lunar eclipse, depending on the conditions of Earth's atmosphere at the time of the eclipse. The amount of dust particles, water droplets, clouds, and fog can have an effect on the degree of redness. Volcanic ash and dust in the atmosphere can also cause the moon to turn dark during an eclipse.

Fun fact: If you are lucky enough to see a total lunar eclipse from the moon, you will see a red ring around Earth. In fact, you'll see every sunrise and sunset happen at that specific moment on Earth! 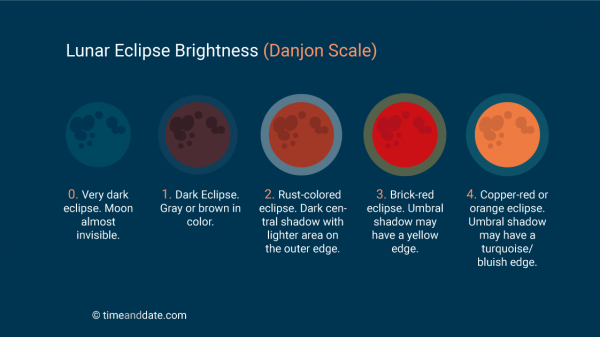 Scientists measure the appearance and brightness of a total lunar eclipse using a five-point scale - ranging from 0 to 4 - called the Danjun scale (see image). A lunar eclipse is graded and assigned a value on the scale at the time of the midpoint of the totality.

Jordanian seismological observatory: an earthquake with a magnitude of 3.5 south of Sharm El-Sheikh

important | An ascending intensification of rain and severe weather fluctuations, starting Thursday, in these areas