Will the fall of the expected Chinese missile this week pose a threat to the Earth? 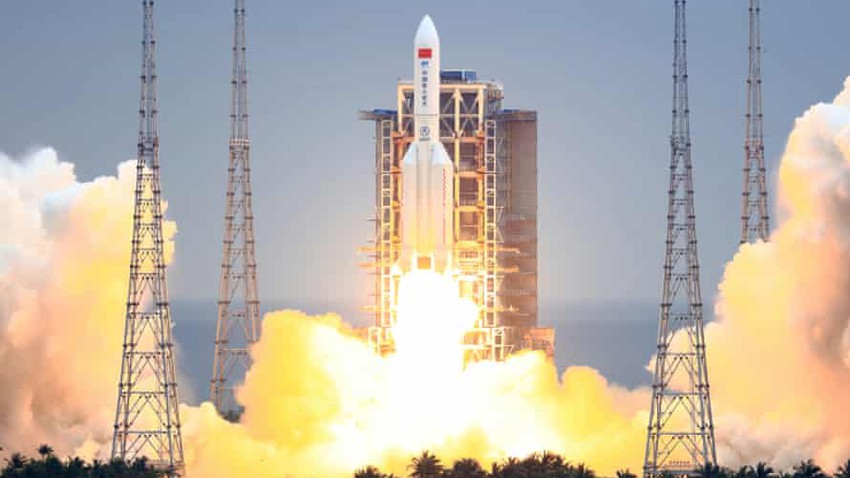 Arab Weather - SpaceNews reported that the body of the Chinese missile, which weighs about 21 tons, which was launched last five days, may fall to the ground in any populated area during the coming days after it has gone out of control, so does the missile pose a threat to the Earth?

Last Thursday (April 29), China launched a 30-meter "Long March 5B" missile, with the aim of delivering the unmanned base unit "Heavenly Harmony" into low Earth orbit. This unit will become the residence of the astronaut crew. In a space station that intends to complete it by the next 2022.

The missile then entered itself into temporary orbit (not as planned), and the missile body is expected to re-enter Earth uncontrolled this week at an unknown landing point. Experts fear it will fall on a populated area.

Does the missile pose a threat to the earth?

"It might not be safe for it," said Jonathan McDowell, an astrophysicist at the Center for Astrophysics at Harvard University. "The last time a Long March 5B missile was fired, it ended up with large, long rods of metal flying through the sky in populated areas. It caused damage to many buildings in the Ivory Coast. Although most of the missile parts were burned upon entering the earth's atmosphere, huge pieces of metal remained that collided with the ground. But fortunately no one was injured. "

The missile's path and when it fell to the ground

Then its altitude decreased to nearly 80 km, and SpaceNews reported that ground observations made by amateurs showed that the missile body is decreasing in height and approaching the ground uncontrollably, and it is impossible to predict where it will eventually enter the Earth's atmosphere. Because of its speed, although McDowell said the most likely outcome is that it will fall into the sea, where the ocean covers about 71% of the planet.

McDowell added: "Some of the missile parts will survive combustion upon re-entry into the atmosphere, and will look like the wreckage of a small plane 100 miles away."

Since 1990, no space masses weighing more than 10 tons have been left to return to Earth unchecked, and this may be China's negligence in letting a 21-ton rocket block fall to Earth uncontrollably.

Depending on the missile body's current orbit, the missile passes over the ground north - New York, Madrid and Beijing, and as far south as southern Chile and Wellington, New Zealand, and can return to Earth at any point within this region.

Because of its speed, a small change in its course can make all the difference in where it ends up. It is expected to return to Earth on May 10, possibly two days before or after it. Once it becomes clear which day it will return to Earth, experts can predict its landing time within six hours.

The reason for the launch of the missile