Winter is returning: an air system is forming that restores the prestige of the winter season and a number of winter depressions, expected starting in the middle of this month, God Almighty willing 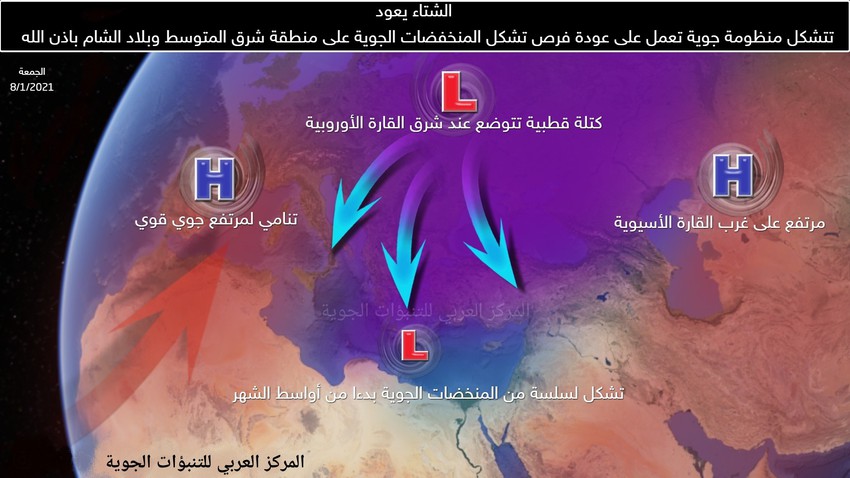 Muhammad Al-Musallam- The eastern region of the Mediterranean, including the Levant region, is still living a long period of stability that began at the end of last December and continued until these days, so that the region lived nearly three weeks of stability.

This stability coincided with the occurrence of a state of rain retreat in all regions of the Levant, in conjunction with the continuous flow of dry eastern winds towards the region coming from deep in Saudi Arabia.

This long stability we have referred to through the seasonal bulletin for the winter season, which was listed during the middle of last October through the occurrence of long periods of stability between each air activity.

We mentioned previously that there are expected changes in the shape of the air system in the northern hemisphere during the middle of this month, so that it is expected that the air systems will change to make the eastern region of the Mediterranean, including the Levant region, gradually exposed to cold winter air depressions.

This change begins first in the form of a growth of an air height over the northern African regions extending towards parts of western and central European continent, so that this altitude is expected to cause a change in the course of the cold and very cold air masses from the west of the European continent towards eastern Europe, and as a result of the continued control of The air height on North Africa and Western Europe, it is expected that the effects of the air masses flowing towards the east of the European continent towards the eastern Mediterranean and the Levant region, to form an air depression during the end of next week, which is likely to be highly effective

Before all that, it is expected that a significant rise in temperatures will occur during the beginning of next week, which is a reaction to the start of changes in the course of cold air masses, so that the temperatures rise unusually for such a period of the year, and very warm weather prevails over most regions.

This and God Almighty knows best

Friday | A second-degree air depression affects the kingdom, and a cold air front crosses at noon