With an area equivalent to the Arabian Peninsula, the Levant, Turkey and Iran combined ... Learn about the largest storm on the planet currently 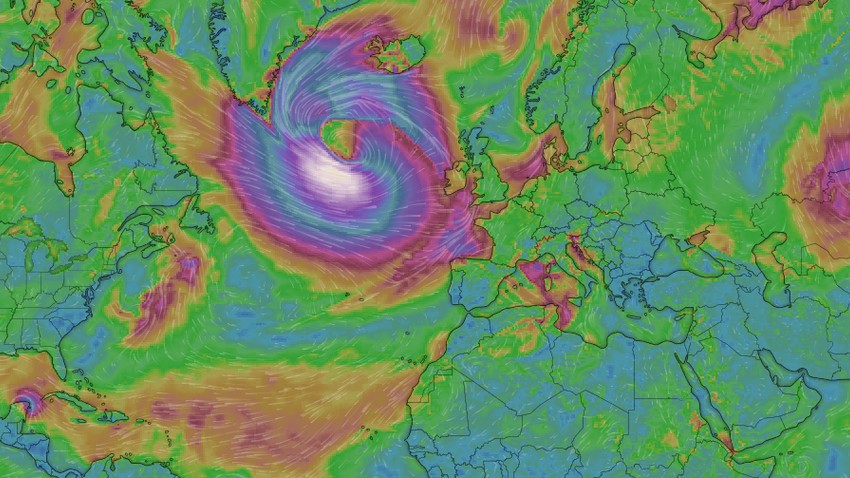 Arab Weather - Sinan Khalaf - meanwhile, satellite images monitor the continuous development of one of the largest storms on Earth in the current period, and the storm will center on Tuesday to the north of the Atlantic Ocean, and it is expected that the area of the storm will exceed the area of the Arabian Peninsula, the Levant, Turkey and Iran combined !

A storm strongly tornado of the second category!

Perhaps the most characteristic of this storm is the speed of the accompanying winds, as it is expected that the speed of wind gusts will touch the 170 km / hour mark, meaning that it is equivalent in strength to a destructive hurricane of the second category, but the air system is completely different from hurricane systems, as the hurricane derives its strength mainly From the heat of the ocean waters, while the North Atlantic storm derives its power from the formation of a cold air front resulting from the meeting of cold polar air with warm air from the south, and the warm current of Mexico.

Why is this huge and the vast area of the Atlantic storm?

As for the reason for the magnitude and vast area of the Atlantic storm, it is due to the enormity of the water body, which represents the source of water vapor, the "cloud fuel", in addition to the huge convergence of cold polar air from the north with the warm and moist air currents from the south.

The storm's path and impact areas for the coming days

It is expected that the cold air front will start to affect, starting from tonight, on the British Isles (Ireland, Scotland and England), with high winds and heavy rains, while it will start to affect on Tuesday northern Spain and western France, and it will also affect the Netherlands and Belgium in the coming days.