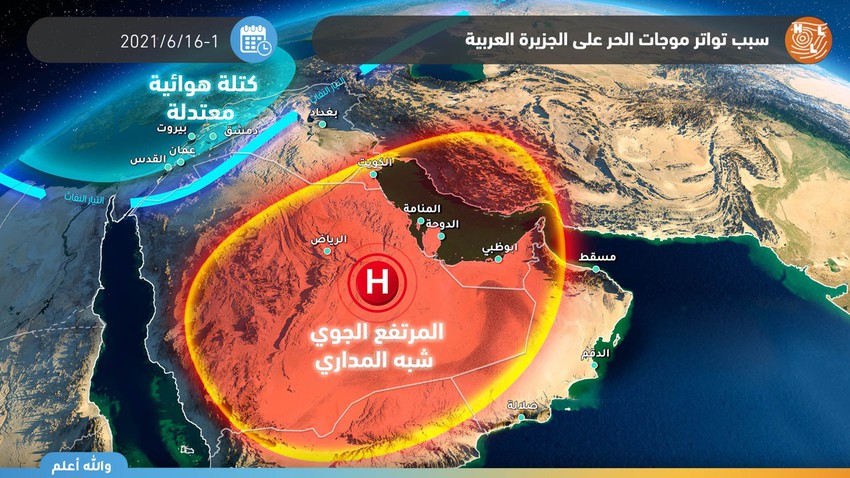 Weather of Arabia - Since the beginning of June, the Arabian Peninsula has been living in a hot and exhausting atmosphere and record temperatures, as some weather monitoring stations recorded the air temperature in the shade to more than 50 degrees Celsius in a way that can be described as early and standard for this time of year.

The most prominent records recorded in the Arabian Peninsula

When talking about the most important records recorded during the current June, the ground stations of the UAE National Center of Meteorology recorded on Saturday, June 5 in Sweihan in the Emirate of Abu Dhabi, a record temperature of 51.8 degrees Celsius, which is far from normal rates by more than 18 degrees Celsius.

As for the Sultanate of Oman, according to the Directorate General of Meteorology at the Civil Aviation Authority, the maximum temperature recorded on Wednesday, June 16, reached 51.6 degrees Celsius at Al-Juba Station in the Wilayat of Mahout, and this temperature recorded is the highest in the history of climatic records for the Sultanate of Oman. 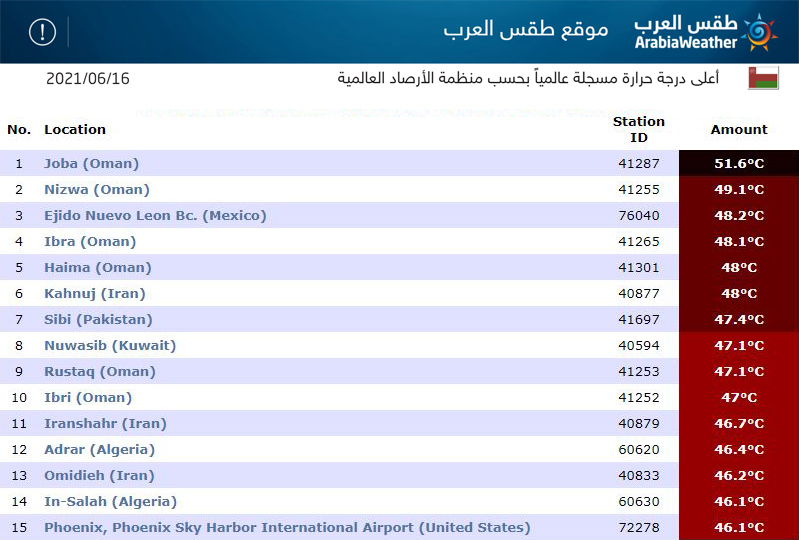 Many questions are asked about the reason for the control of hot masses on a standard basis over all parts of the Arabian Peninsula and the resulting heat waves, and the Arab weather answers that there are complex weather factors that constitute weather phenomena in the world and the Arabian Peninsula in particular, and we review with you the most prominent reasons that control God’s will over the sovereignty of These weather conditions.

The prevailing air systems in the northern hemisphere are represented by a rush of hot air masses towards the southern and western parts of the European continent, which extend towards the depth of the old continent at intervals, causing a heat wave in those areas. From the atmosphere, as a result of the behavior of a positive pattern of the North Atlantic coefficient ( NAO ) and the weakening of the polar cell (the polar cell), which leads to the rush of a series of relatively cold air masses east of the European continent to become the Levant under the influence of moderate air masses and temperatures below their normal rates Remarkably. 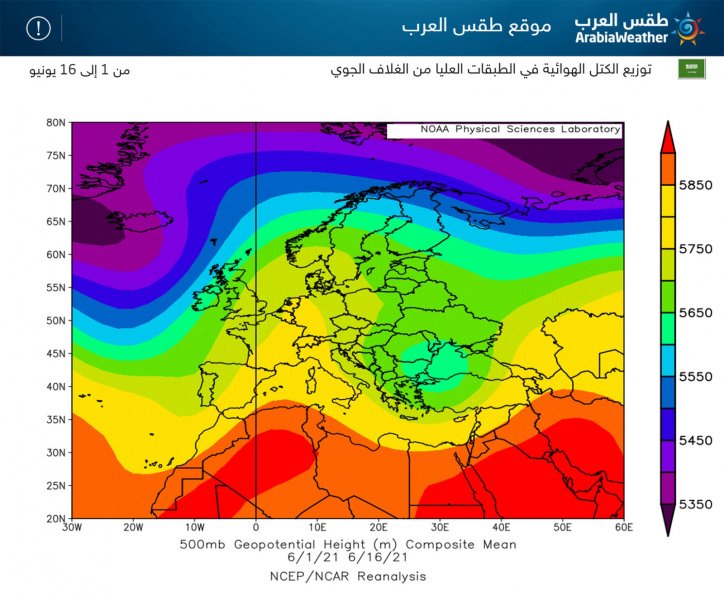 This air system makes the entire regions of the Arabian Peninsula under a strong construction of the semi-tropical air altitude, as a result of the activity and refraction of the jet stream over the atmosphere of the Levant, as it takes the role of a wall against any incursion of moderately hot air coming from the north, which means the disruption of the upper support of the Arabian Peninsula, and the altitude also contributes In the upper atmosphere, rising air currents bounce from the surface of the Earth, and descend air currents are emitted, which in turn cause air pressure in the lower layers of the atmosphere, causing a rise in temperatures. 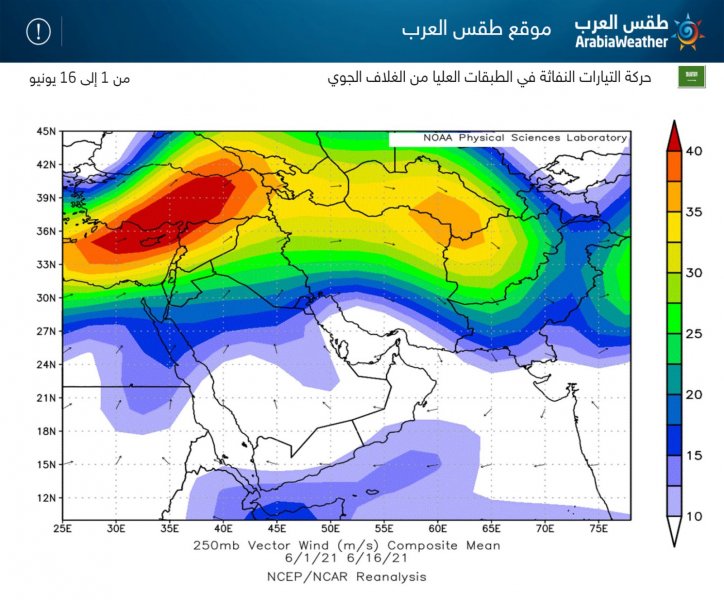 It is worth noting that the jet streams separate the cold air in the north from the warm air in the south at a level of 300 to 200 hectopascals, i.e. at an altitude of 10-12 km. These high-speed currents often rush from west to east, thus directing the weather around the world. 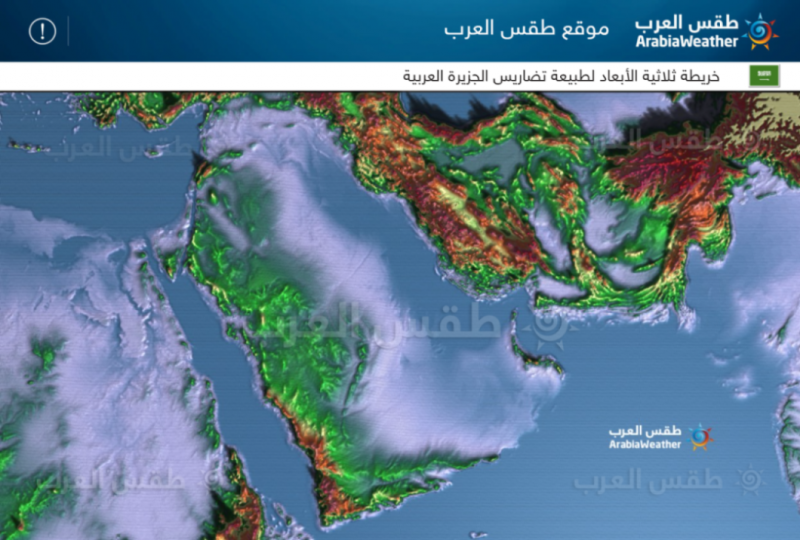 There is no harm in pointing out that the nature of the Arabian Peninsula from the lack of afforestation makes it highly susceptible to absorbing solar radiation, in addition to the nature of the topography of the eastern part of the Arabian Peninsula, including the Arabian Gulf Basin due to its proximity to sea level and the gusting north winds that make it one of the hottest basins on the face of the earth so that it becomes a theater to form thermal depressions.

The temperature of water bodies plays a prominent role in controlling the atmosphere, including the Pacific Ocean and the tropical region, especially regions 3 and 4, as it directly contributes to controlling the Hadley cell between its intensity and weakness. The Arabian Peninsula, in conjunction with the presence of warm currents in the North Pacific Ocean, which also contribute to the intensification of this high altitude.

In the same context, the cooling taking place in many areas of the North Atlantic Ocean contributes to closing the classic path of cold air masses, so that the depressions remain constant, ranging in place, especially in the west of the British Isles and Iceland, all the way to the island of Greenland, which worked to rush moderate air masses over the Levant. And the subsequent effects on the Arabian Peninsula, as mentioned earlier. 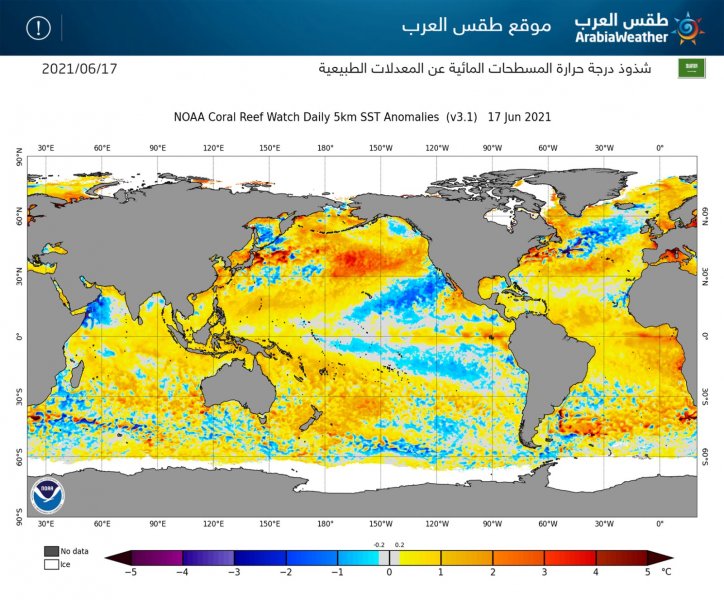 Arab weather forecast for next summer

The title of Arab Weather, published by the seasonality, is "heat waves, especially in July, and thunderstorms improve in the south of the Arabian Peninsula in the second half of the summer." The Arab Weather team also expects a remarkable activity of Al-Bawarih winds during the period... Click here for more.